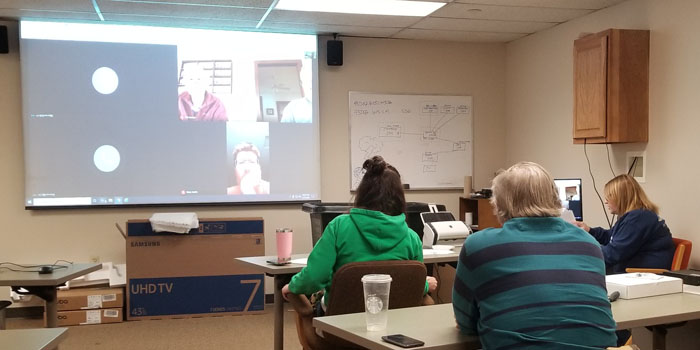 Kosciusko County election officials are scurrying to prepare for an in-person primary on June 2.

The county election board, consisting of Republican Randy Girod, Democrat Bill Morton and County Clerk Ann Torpy, were joined by chairmen from both political parties on Friday to hash out preliminary plans for the primary, which was moved from May 5 to June 2 because of the pandemic.

The county plans to scale back the number of polling locations in part because some locations were not big enough to allow for needed social distancing. Normally, the county has 38 polling sites. That could be reduced to about 30. A finalized list has not been released as officials seek to use schools, which have more spacious accommodations.

Torpy said she’d prefer voters seek an absentee ballot ahead of the election. More than 500 voters have already done so.

“It’s safer. It’s a lot more processing on our end, but in the end, it’s safer to the voters and my poll workers,” Torpy said.

Absentee voting restrictions have been relaxed by the state so that nobody needs to provide a reason.

Voters who do vote in person will be asked to sanitize their hands when they arrive at the polling sites and will be given disposable stylus so they don’t directly touch the screens.

The county usually has between 280 to 325 poll workers, but only about 185 have indicated they plan to work. Many of those opting out are older and are concerned about the coronavirus. Torpy said they are unsure how many poll workers they will need, but anyone interested in helping should contact party leaders.

Key dates for the re-aligned primary:

STILL HOPING – Kosciusko County GOP Chair Mike Ragan said they’re still working with Gov. Eric Holcomb about him attending the GOP’s Lincoln Day Dinner. A new date has not been firmed up yet, but they are hoping to have it before Primary Election Day. On a related note, Republicans still plan to host their annual fish fry at the county fairgrounds on May 6. They plan on making the decision by May 1 on whether it is carryout only. (Editor’s note: this item has been updated to correct a date).

MEDIA CUTS – These are tough times for everybody, but media outlets are getting pounded. Some newspapers, including the Elkhart Truth and Goshen News, have scaled back the number of publication days. The South Bend Tribune (where my wife works), had already instituted furloughs for many workers and on Friday let go two longtime newsroom employees. That was part of a company-wide effort by Gannett, which owns the newspaper.

And in Fort Wayne, the News-Sentinel, which had been reduced to a meager online presence, saw its only reporter furloughed Thursday. The move is being viewed as the last nail in the coffin for the once-proud conservative afternoon daily. The News-Sentinel quit publishing a print edition a few years ago. Prior to that, Fort Wayne had been one of the few cities in Indiana with two competing newspapers. Now there are none.

NO REPORTING – Second District U.S. Rep. Jackie Walorski sent out an invite last week to media to participate in a teleconference with her for a Q&A about the coronavirus. But there was a catch. The conversation was to be off the record. Listen but don’t report. The reason was to provide for “more open communication.” The event, though, was canceled due to a last-minute change in plans for the Republican lawmaker.

NO SNITCH – I will never understand the anti-snitch mentality. That was reinforced with a call I got this week about the Most Wanted column, which I prepare each week. The caller, who sounded like a young woman, complained that she appeared in Most Wanted in a silhouette (which we use when police don’t provide a mug). Apparently unconcerned about her outstanding warrant involving possession of methamphetamine, she offered to send me a photo of herself that I could upload and replace the silhouette with because – as she claimed – the black and white version is code for being a snitch. Numerous people were telling her this, she said.

InkFreeNews did not change the mug and I resisted telling her she needs new friends and priorities.