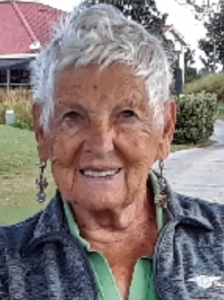 She was born in Hollywood, Calif., on Nov. 28, 1937, to the late Robert and Judy Kunkler. She was raised in Chrystal Lake, Ill.  She later gained a stepfather: Eddie O’Neil.

She attended Hanover and Huntington College. She met Gene Robert Kaufman at Hanover College in Madison and they wed on the campus on March 25, 1959.

Along with Gene’s parents and family, together they built Etna Acres Golf Course. She was co-owner of Etna Acres. She loved picking the driving range and sitting in the sun to watch the birds. She sought to make everyone feel welcome at Etna Acres.  She was well known for her cheeseburgers, but you had to promise not to tell anyone.

She was a member of Alpha Delta Pi and Daughters of the American Revolution. She was also a 50-year member of the Order of Eastern Star in Wabash. She also served as a Girl Scout leader.

Etna Acres has been the location for numerous golf fundraisers through the years. In lieu of flowers, if you have participated in one of those outings, please consider a donation to one of the charities. A couple that she felt most passionate about included the Shriners Hospital and Folds of Honor.

Per Joby’s request, there will be a private family service held at Etna Acres Golf Course.