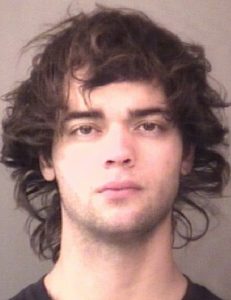 ATWOOD — An Atwood man was recently arrested after strangling and battering a woman.

Tyler Tanner Poyser, 21, 205 S. Harrison St., Atwood, is charged with strangulation, a level 6 felony; and battery, a class A misdemeanor.

On July 10, 2019, a Kosciusko County Sheriff’s officer went to a hospital regarding a battery that occurred. The officer met with a woman who said that a man, identified as Poyser, had strangled and battered her.

According to court documents, Poyser and the woman were at a friend’s house on July 9, 2019, when they decided to leave. The woman asked Poyser to take her home, but Poyser allegedly refused and instead stopped at a church’s parking lot.

Poyser then said he wanted to have sex with the woman, but she refused. The woman said Poyser began to remove some of his clothes and that she continued to refuse. Poyser then began to choke the woman and hit her in the face. The woman said this behavior continued for hours until Poyser fell asleep. The woman then contacted a man, who picked her up from the scene.

At the hospital, the officer noticed bruising on the woman’s neck and face.