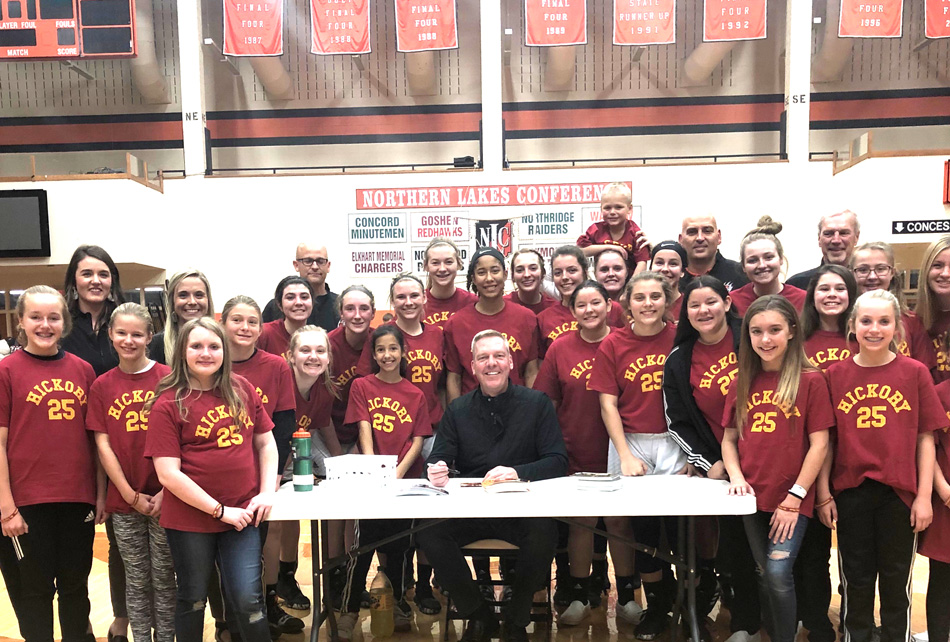 Steve Hollar, who played Rade Butcher in the movie ‘Hoosiers’, sits with the Warsaw girls basketball team last season during a special ‘Hoosiers Night’ event. The movie has continued to serve as a platform even when basketball isn’t being played. (Photo provided)

WARSAW – A few days ago, my pastor asked if I wanted to tackle a story idea, using a format from a podcast he listens to where the guys take on sports movies and size them up. I figured, sure, why not. But rather than just recounting films most everyone has seen, we came up with an idea that hopefully lightens the mood a little.

For as long as the sports world continues to cease to produce live games, I’ll dig into a movie for a Friday column where I pair a notable sports movie with how the plot spins relevant to today’s area sports world.

For the maiden voyage I’ll take on ‘Hoosiers’ in relation to this weekend being when the IHSAA Boys Basketball State Finals was set to have taken place.

The movie obviously has stood the test of time. It’s plot is often paired with any and all underdog teams that find themselves success in a tournament setting. Based off the 1954 Milan High School run to a state title, it was everything basketball purists still desire. One class basketball, one shining moment (not the song), a story that can be told forever.

The general premise of the movie is pretty well-known. Hickory is the small school taking on several levels of adversity, and eventually overcomes them. Various players take on leading roles, whether its Jimmy Chitwood, or Rade Butcher, or Ollie the team manager. Gene Hackman’s coaching role as Norman Dale indirectly became a blueprint for every Class A coach from 1987-97 trying to beat the Class 4-A giants in the IHSAA sectional.

Grace College showed the movie on the team bus heading to Bloomington in 2009 for its men’s basketball exhibition against Indiana, for sure using the ‘small versus big’ angle. The film was referred to as much as anything when Butler made its two runs through the NCAA tournaments in 2010 and 2011. I mean, the Bulldogs took on Duke and UConn, two of the more decorated programs in the country and Butler has a small “turn here” sign at 46th Street heading down Meridian Street in Indy. It fit.

And being based in Warsaw, this wouldn’t be a proper story without Rade Butcher himself, Steve Hollar, offering some insight.

“Even though the style of play and rules are different now the concept of competition, coach to player relations and fans cheering on the underdog or their team has remained the same,” Hollar said. “The main difference over the time is we have lost the sense of community and community involvement. Basketball up to the time of the split into class and even more at the times of consolidation destroyed the sense of “community”. Both of those events in Indiana basketball have significantly eroded the community interest. It’s because the small and large communities used the Friday night basketball games as a religion of sorts, social fabric of society and common interest that kept communities together.

“Hoosiers did an outstanding job of painting this real feeling of community on screen. Media of kinds has divided community interests, mobility of our society and the changes I have mentioned above have all contributed to the slow decay of high school basketball. It seems to me that the smaller class 1-A and 2-A have thrived in the class system as it has given them a platform to draw the community back together.”

Media outlets all over the state are still holding onto their Hoosier Hysteria moments, whether they are playing out brackets on Twitter, or lining up all-time teams against one another in a power rankings play Jeff Sagarin has to enjoy. From our area, 11 teams were still alive in the regional tournament when the IHSAA was forced to cancel the state tournament last week.

Could NorthWood have upset Norwell and survived a night game in the largest basketball house in the state in New Castle? Would that momentum have driven them towards its first-ever boys state title, joining the girls as the only Northern Lakes Conference school ever to win both titles in the same year? Plymouth was close, winning the boys title in 2007 and the girls taking it in 2008. Would Argos been able to have had their two alpha programs – boys soccer and boys basketball – claim titles in the same year after the Dragons won the Class 1-A soccer title last fall?

The idea of the underdog drips ‘Hoosiers’. Indiana high school basketball, college basketball, basketball in general, ‘Hoosiers’ is just tied to it all. Milan was the ultimate ‘Cinderella’. While we’re all left to wonder if the proverbial shoe fit for any of the 11 area teams, Hollar, Gene Hackman and ol’ Hickory High will eternally provide hope. Even in a season where we won’t get the Hollywood ending.

Hollar’s three kids all went through Warsaw and excelled, and he saw plenty of tie-in to their experience in accordance with the message from the movie.

“My three kids all played basketball but loved other sports,” Hollar said. “I always told my kids to play many sports but spend your time and effort in the sport you love. My two sons, Bennett and Jonny, loved golf. They both played collectively in seven IHSAA State golf finals (golf is still a one class sport and worthy of mention!). My daughter loved soccer and was a college All-American at the NAIA level (at Grace College). Even though Hoosiers is about basketball, the movie’s themes easily cross over to other sports. I know our society loves high school and college basketball because it’s amateur.”