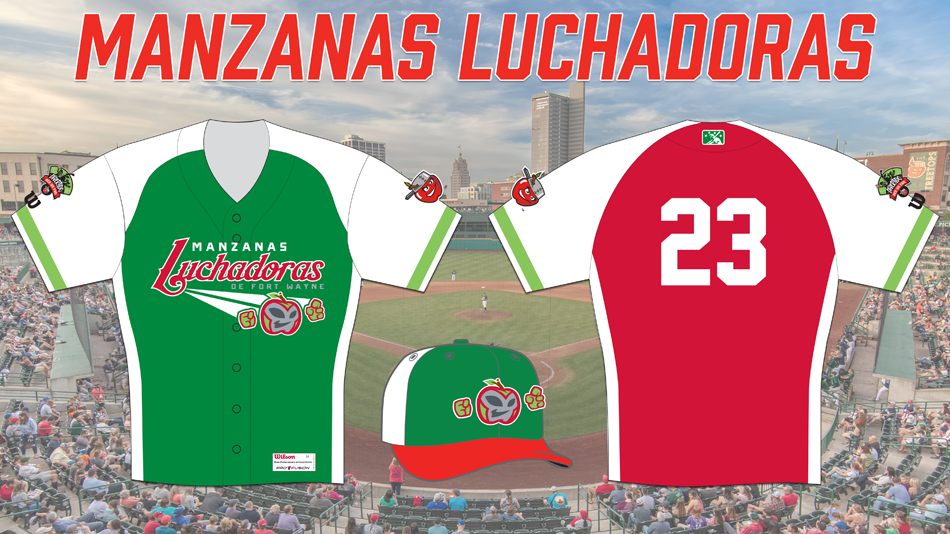 FORT WAYNE – The Fort Wayne TinCaps unveiled the uniforms for their Manzanas Luchadoras identity on Thursday. The team will be taking the field as the Manzanas Luchadoras (“Fighting Apples” in Spanish) for six games at Parkview Field during the 2020 season as part of Minor League Baseball’s Es Divertido Ser Un Fan(“It’s Fun to be A Fan”) Hispanic fan engagement initiative.

The Manzanas Luchadoras jerseys and hats were revealed during an assembly at Fairfield Elementary School in Fort Wayne, about 1.5 miles from Parkview Field. Approximately one-third of Fairfield Elementary’s enrollment is Hispanic/Latino, representative of the area’s increasingly diverse population. As of 2019, Fort Wayne’s Hispanic/Latino population was estimated at 26,000, close to 10% of the city’s overall population.

The Manzanas Luchadoras jerseys and hats are red, white, and green — not only keeping in theme with the TinCaps’ regular color scheme, but also reminiscent of Mexico’s flag. (The majority of Fort Wayne’s Hispanic/Latino population is of Mexican origin.)

The jerseys are green on the front with text reading “Manzanas Luchadoras de Fort Wayne” across the chest and the Manzanas Luchadoras fighting apple logo under that. “Manzanas” is in all-caps white, “Luchadoras” is in red script, and “de Fort Wayne” is in all-caps gray. The shoulders and sleeves of the jersey are white with a bright green stripe at the bottom of the sleeves. The left sleeve features the TinCaps’ regular apple logo, while the right sleeve showcases Minor League Baseball’s Es Divertido Ser Un Fan logo. The back of the jersey is red with the uniform numbers in white.

The hats have a green front with the Manzanas Luchadoras logo in the center. The sides of the hats are white. The bill and the back of the hat are red.

The uniform will be worn with white pants and either green or red belts and socks.

“We think these uniforms capture the spirit of the TinCaps as well as the more vibrant flair popular in Latin American culture,” said Limmer.

The Orchard Team Store at Parkview Field is stocked with the Manzanas Luchadoras on-field hat, as well as other hat styles and t-shirts in both youth and adult sizes. Replica jerseys will be available to purchase in April. Fans can also shop online at TinCaps.com.

The team is offering fans a special package to buy an All-Star ticket to each of the six games for $72, with the bonus of a free Manzanas Luchadoras “clean-up” style cap.

The TinCaps collaborated with the Greater Fort Wayne Hispanic Chamber of Commerce and other local Hispanic community leaders to plan their Manzanas Luchadoras identity.

“We’re looking forward to seeing the Manzanas Luchadoras play at Parkview Field on Días de la Familia in 2020,” said Herb Hernandez, Director of the Greater Fort Wayne Hispanic Chamber of Commerce. “We appreciate the efforts of the TinCaps and Minor League Baseball to celebrate our community’s values and culture, which includes a love for baseball.”

In the meantime, the TinCaps are set to begin their 2020 season on the road in Kentucky against the Bowling Green Hot Rods (Tampa Bay Rays affiliate) on Thursday, April 9. Opening Day at Parkview Field is scheduled for Monday, April 13 (6:05 p.m.) against the Dayton Dragons (Cincinnati Reds affiliate).

Fans can purchase tickets to all 70 TinCaps home games, including the team’s games as the Manzanas Luchadoras, at TinCapsTickets.com, by calling 260-482-6400, and at the Parkview Field Ticket Office.