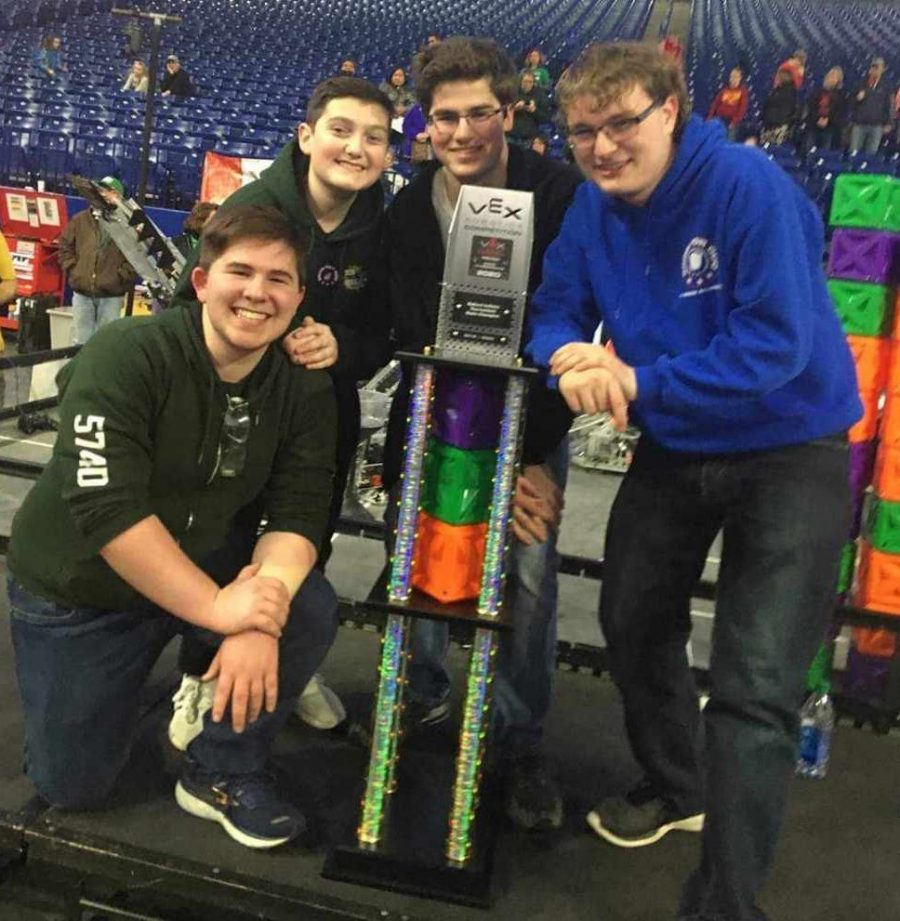 INDIANAPOLIS — The Wawasee Iron Pride Robotics teams are the Indiana VEX Robotics state champions and state runners up for the second year in a row.

Wawasee’s 574D, ranked fifth, allied with Triton Central High School, facing off against Wawasee’s 574C, ranked 19th, and Portage High School in a battle royale for the title. The competition was fierce during the first of the best of three rounds. 574D came out on top with points, but their Triton Central partners accidentally knocked a scoring cube into their opponent’s scoring zone resulting in an automatic DQ for round one and giving C the first win.

574D fought back hard in the next round winning cleanly 46 to 38. Wawasee graduate Joseph Kelsheimer was the official announcer for the match and called the play by play, announcing the next round would determine the state championship, “Unless of course it ends in a tie,” foreshadowing the most heated match of the day and a score of 55 to 55 leaving the crowd astonished.

Both sides were evenly matched, but 574D and Triton Central edged out 574C and Portage in a finale that had the crowd at Lucas Oil Stadium on its feet with a score of 51 to 46.

In order to make it to the finals 574C had to pass through team 6842Z from Park Tudor who is ranked third in the world. In a match too close to call from the stands, 574C edged Park Tudor out by a mere four points with a score of 61-57. This pitted both Wawasee teams against each other in the finals for the second year in a row and guaranteed Wawasee earning the top two spots in the championship. Last year it was C that emerged on top.

Both teams, having advanced to semifinals at the state championship, are heading to the VEX Robotics World Championships that will be held April 22-25 in Louisville, Ky., at Freedom Hall.

Other accolades for the day included 574D earning the Amaze Award, which is given to a well-rounded and top-performing team. This brings this season’s Iron Pride total trophy count to 19, plus adds another state banner to put on display. Iron Pride coach Jed Wandland said, “It was a roller coaster of a day. We had one of the toughest match schedules in the qualifying rounds and not being ranked in first or second for alliance selection put us at a distinct disadvantage, but it’s a testament to the kids’ incredible tenacity and drive that they were able to get to the finals.”

Both 574D and 574C have qualified to compete in the 2020 Vex Worlds Robotics Championship in Louisville.

574F placed 38th and made it to the round of 16 in the elimination bracket.

574H placed 19th in the middle school division and made it to the round of 16 in the elimination bracket.

Thanks to the Kosciusko County Sheriff’s Department and the North Webster Police Department for the escort through the community at 11:30 p.m. Saturday.