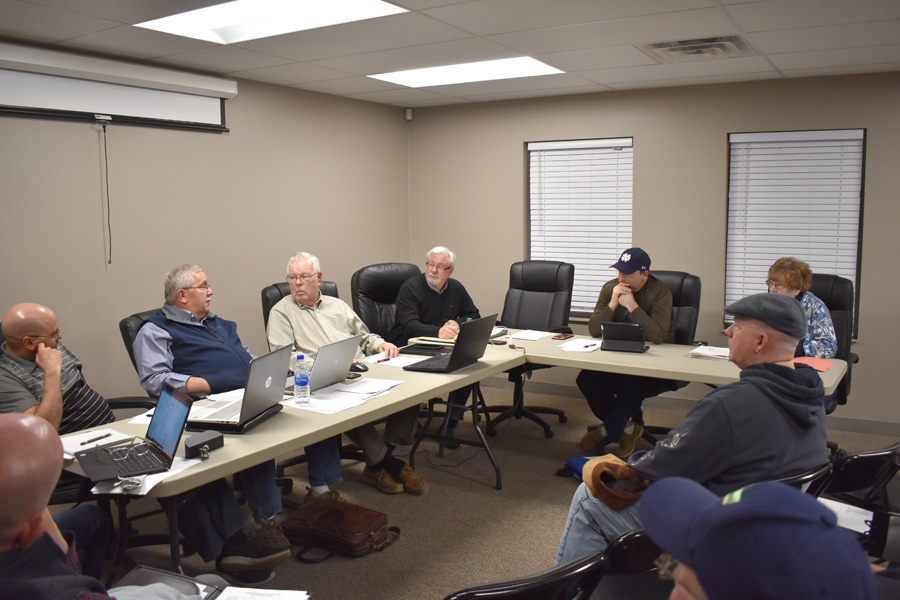 Among other agenda items, the board heard a report from Astbury Water Technology’s Matt Rippey, LRSD wastewater plant operator, reviewing district operations for 2019. 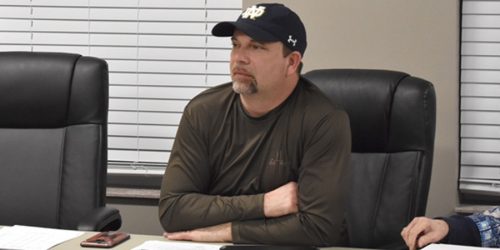 Joe Cleland was welcomed as the newest LRSD board member at its Feb. 19 meeting. (Photo by David Hazledine)

Board President Jim Haney introduced Cleland, who is taking the place of Greg Mitchell, who resigned at the end of 2019. According to Haney, Cleland has lived in the area since 2001 and owns two properties in the district.

Cleland’s background, as well as those of other board members, will be posted on the new LRSD website, which is nearing completion and will go live following the addition of an updated district map.

In 2019, LRSD wastewater plant processed 42 million gallons of sewage and received no permit violations for the year. The average daily flow, which varies widely throughout the year, was 114,000 gallons, under 30% of the plant’s capacity, said Rippey.

Trustee Bob Marcuccilli asked if 22 bad pumps were unusual. Rippey replied it was normal in his experience, and by the five to six-year mark the district should expect a 10% failure rate for budgeting reasons.

Members also considered how to inform homeowners what not to put into the system, particularly disposable wipes and grease. “It’s a toilet, not a trash can,” Rippey commented. “Educating the public sure couldn’t hurt,” added Marcuccilli.

Rippey also informed the board three of the eight failed check valves for grinder pumps have been dug up and found to have the same problem, a broken plastic pin.

Casey Erwin, DLZ engineer, added the distributor of the valves, Crane-Barnes, is “seeing more failures” of a similar kind at other low-pressure system installations like LRSD and are also looking into the problem on an international scale. (Systems like LRSD are very common in Australia, for example.)

Haney queried if the pin was too brittle, possibly not made from a proper material, and suggested having it analyzed. The cost for pulling and replacing the part is roughly $1,000, said Rippey, and replacements use the same design.

LRSD manager Greg Gear reported the number of unconnected properties remains at 10. There was also one new construction connection.

To facilitate the connection of a home recently purchased at a commissioners sale, the board voted to issue a letter informing the county auditor the district will release a lien on the property if it is connected within 90 days or files for a rate reduction.

The board also heard a request from Heart of Barbee LLC., formerly Barbee Landing Mobile Home Park, to eliminate one of the 15 sites billed. Owner Brian Erne cited aerial photographs and other documents from the 1990s showing there had only been 14 sites “for many years.”

Haney explained how during the district’s formation the decision was made to count spaces, not units, and the USDA loan needed for construction was based on those numbers. As LRSD now pays debt service on that loan, it would have to raise rates for others if it allowed rate eliminations of the kind Erne requested. “We would run the risk of losing money fast,” said Parke Smith, board member. The board did vote to approve a rate reduction, however.

Erne also asked the board if a small subdivision of three homes on Shoe Lake Road he will soon be selling could be served by one grinder. Erwin cautioned the board to consider the future ramifications of allowing such arrangements on a larger scale. “Make sure its a unique situation,” he counseled.

The discussion alerted board members to the fact LRSD does not have a subdivision policy in place. Boxberger said it would take two to three months to draft one. In the meantime, members agreed a limit for three lots to one grinder be set on the Shoe Lake Road properties.

LRSD board also voted to create a three-person committee to look into the possibility of entering into treatment services with Jellystone Park. A representative of the park said it was “looking long term” and weighing several options.