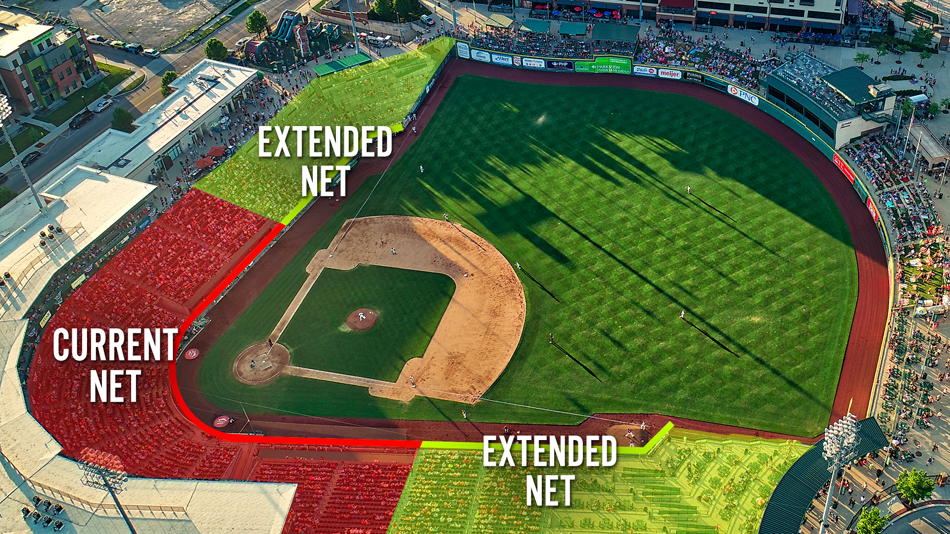 The netting will be expanded to provide increased protection for all non-outfield seating areas at the ballpark.

“This is something we’ve been researching and planning for months,” TinCaps President Mike Nutter said. “By further expanding the netting at Parkview Field, we’ll increase the area of protection for fans at the ballpark. Fan experience is our number one priority. Keeping people safe while they enjoy a TinCaps game should always be a part of that experience.”

In 2016, the TinCaps first expanded the ballpark’s original netting to include seating sections from the home dugout to the visiting dugout. The planned expansion in 2020 will provide increased protection for all seating areas in foul territory at Parkview Field.

The TinCaps know the expanded netting at Parkview Field will further establish Parkview Field’s reputation as a fan-first facility for entertainment, affordability, and guest safety.

While netting previously has guarded fans in Sections 103-113, the expanded netting will additionally cover the Toyota Field Boxes, Sections 101, 102, 114, and a majority of the Huntington University Picnic Pavilion.

“We’ve researched this extensively,” Nutter said. “We know that expanding the protective netting at Parkview Field will best benefit our fans and their experience at the ballpark. When we expanded the netting in 2016, we heard from so many fans, thanking us for providing peace of mind when sitting in areas that were better protected from foul balls. We know the same will continue to be true for even more fans now in 2020.”

Opening Day 2020 at Parkview Field is set for Monday, April 13, at 6:05 p.m. when the TinCaps host the Dayton Dragons (Cincinnati Reds). Season tickets and tickets for group outings are already on sale. Individual game tickets will go on sale Wednesday, Feb. 12. To purchase tickets or find out more, call (260) 482-6400 or visit TinCaps.com.