What a week! Nationally – and locally – we saw a few things in recent days in politics that many would probably just as soon forget.

As the nation’s eyes watched the Iowa Caucuses debacle, a reality show version of a State of the Union and an impeachment vote that acquitted President Donald Trump (followed by his own angry reactions), Kosciusko County had its own little drama.

Superior Court 3 Judge Joe Sutton’s entry into and withdrawal from challenging Superior Court 2 Judge Torrey Bauer for his seat left people shaking their heads. Sutton had been expected to retire after 24 years on the bench, but instead, had second thoughts and announced a run. His public attack on Bauer crossed the line of judicial conduct, though, and was so out of the ordinary that one person compared it to a drive-by-shooting.

Whether somebody files a complaint against Sutton remains to be seen, but his quick withdrawal and full apology probably went a long way toward minimizing those chances.

Kosciusko County Dem Chair Brian Smith probably had a moment of regret himself. Smith was quick to insert himself into the Republican controversy by suggesting Sutton was right about Bauer in a post on social media. His reaction after Sutton’s withdrawal, though, was a subdued “womp, womp.”

Sutton’s withdrawal comes just weeks after the withdrawal by Alan Alderfer, who briefly entertained a run for the District 18 State House seat held by the retiring Dave Wolkins. It would be hard to determine, but I bet you’d have to go way, way back in Kosciusko County history to find an election in which two candidates for major offices withdrew from their races within days of announcing. 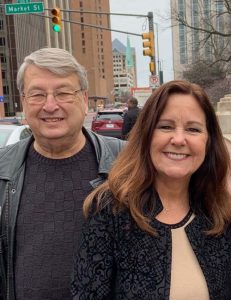 POLITICAL NOTES – A few things you might not know:

LEGISLATIVE UPDATE – Kosciusko Chamber of Commerce will host two legislative updates in Warsaw for the public from state lawmakers this winter. The first will be on Friday, Feb. 14 (my heart is already palpitating!) The second will be on March 13. Both events will be at the Shrine Building in Warsaw and are coordinated with the Rotary Club. Registration is required. Lunch (optional) is $10 and starts at 11:30 a.m. The discussion will start at noon.

POT DEBATE? – Legalizing marijuana is an idea that’s going nowhere fast in Indiana, but that doesn’t mean there isn’t some interest. The Howard County Cannabis Coalition and Indiana NORML (National Organization to Reform Marijuana Laws) will host the “Indiana 5th District Congressional Cannabis Debate” from 6 to 8 p.m. tonight (Feb. 8) at Elite Banquet Hall, 2820 S. Lafountain St. in Kokomo. The event is open to the public. Participants will apparently include Democrats Dee Thornton and Jennifer Christie and Republicans Andrew Bales and Mark Small, according to a Facebook poster promoting the event.

LOTS OF CHOICES – Speaking of illegal drugs and the 5th District, you might think you’re intoxicated if you looked up the number of candidates seeking to replace the retiring Susan Brooks. A whopping 21 people have filed to run. That includes 16 Republicans and five Dems. The district is north of Indy and includes the cities of Marion, Carmel, Anderson, Noblesville, Fishers and parts of Kokomo.

HISTORY LOOMS – Hard to believe, but my former mayor (yes, I have a home in South Bend) is on the verge of political history in presidential politics. Pete Buttigieg, the guy nobody outside of Indiana knew a year ago, squeaked past Sen. Bernie Sanders to win the Iowa Caucus last week and is now surging in polls ahead of next week’s primary in New Hampshire. A win in New Hampshire would put him in elite company historically, but realistically, he’s still a bit of a longshot to win the nomination. At this point, though, I think people can stop suggesting Buttigieg’s campaign is a joke.

FREE ADVICE – If you’re still reading, I’m guessing you really enjoy politics and might even consider running for office someday. With the filing deadline already passed, I have some advice for future candidates.

First, have a prepared statement and be ready to answer some basic questions. Have a professional-looking high-res photo of yourself that is ready to go. Don’t play favorites with the press. Release your announcement to all media at the same time.  Do some groundwork before announcing. Line up some support. And – unless you are a true rebel – talk to your party’s county chairman about your plans ahead of time. It’s always nice to have them informed and familiar in these instances.