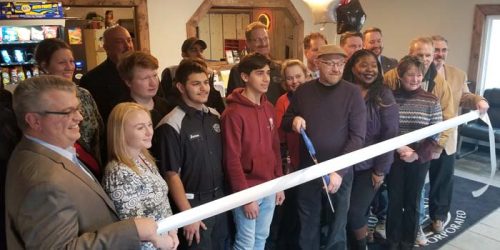 Alan Hoyt (holding scissors), the owner of Global Auto Inc, prepares to cut the ribbon Wednesday at his store in Warsaw. Hoyt and the company were celebrating 25 years in business. At far left is Rob Parker, President of the Kosciusko County Chamber of Commerce.

WARSAW – Alan Hoyt never had time to celebrate the opening of his business, Global Auto, when it opened 25 years ago, so instead, he and his friends celebrated it Wednesday, Feb. 5 at the store at 802 S. Buffalo St.

“I started on a grand total of $4,000 and nothing else – just the hope that it would fly,” said Hoyt after a ribbon-cutting with family, friends and business acquaintances

“I remember sitting here the first day thinking, ‘What did I do?’  And then I had one customer come in that very same day that provided work for the rest of the week and it’s never lacked since,” he said.

The store does auto repair for vehicles – foreign and domestic – specializes in European vehicles.

Over the years, the company had built on to its existing building but had to rebuild after a fire in 2007, Hoyt said.

On Saturday, Feb. 8, from 10:30 a.m. to 12:30 p.m., the store will celebrate its anniversary and give away a car. Scholarships will also be given away and food vendors will be there.