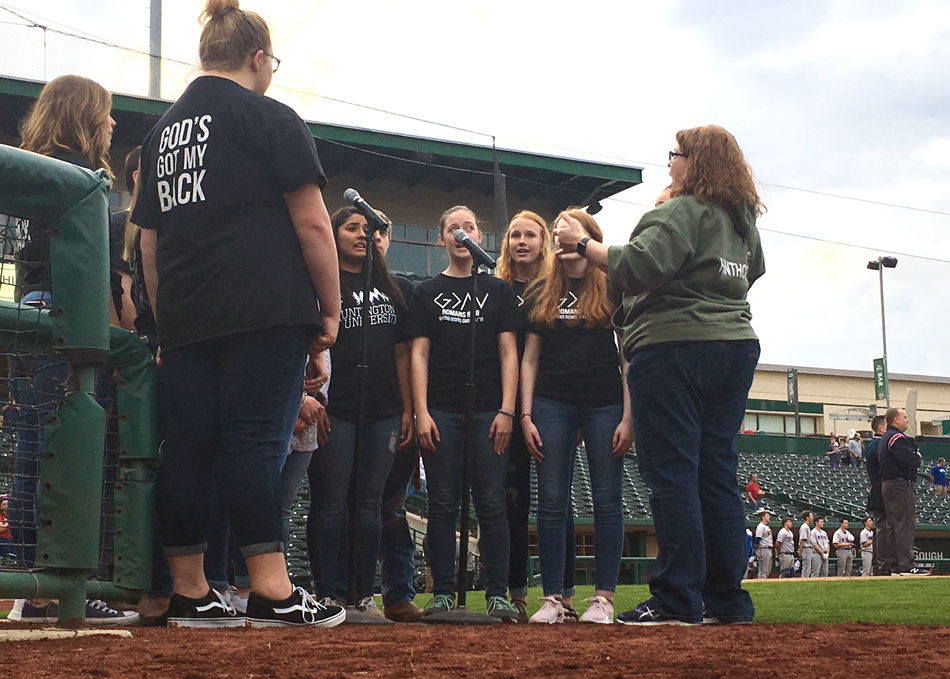 The Fort Wayne TinCaps, along with the South Bend Cubs, are looking for national anthem singers for the 2020 season. (File photo by Mike Deak)

WARSAW – Both regional minor league baseball teams are prepping for the 2020 season, and have issued a series of preseason announcements.

The South Bend Cubs are pleased to announce another opportunity for fans to be part of the upcoming baseball season by submitting their favorite fan photos taken at Four Winds Field. President Joe Hart said a select number of fan photos will be used in promotional materials like television commercials and print advertising. Others will be displayed throughout the season on the jumbo video-scoreboard.

Fans can visit MySouthBendCubs.com to upload their favorite fan photos. Submitted materials should include fan gear, or have been taken at Four Winds Field. Fans can continue to upload their photos to the website or via Facebook, Instagram and Twitter using the hashtag #mysouthbendcubs throughout the baseball season.

“Last year, fans welcomed this opportunity with so much enthusiasm. We were blown away by the number of photos that were submitted,” said Hart. “Our fans are what make this ballpark a success. We absolutely want to do this again because we’re proud to be part of their lives—they are a part of our lives.”

The South Bend Cubs open the 2020 season with a 3-game homestand on Thursday, April 9th, Friday, April 10th and Saturday, April 11th vs. Lake County. All games include special promotions and post-game fireworks.

Auditions and applications are now being accepted for individuals and groups to perform the national anthem at Four Winds Field prior to a 2020 South Bend Cubs home game.

All auditions must be submitted as a video. Audio files, tapes, or CDs will not be accepted. Videos will be accepted as a downloadable file, video link such as YouTube or Google Drive, or DVD. Videos can also be recorded on a mobile device. The 2020 audition form must accompany your submission. Performances of the national anthem are not to exceed two minutes. All vocal auditions must be performed a cappella (no musical accompaniment). Instrumental performances will be accepted. Those who audition in groups must include all members in the audition video.

The last day to submit 2020 national anthem auditions is Monday, March 2, 2020. Applicants are asked to submit their audition video via email or DVD by dropping off at the Four Winds Field main office. Once submitted, auditions will go through a careful judging process. Final decisions will be made in March and a member of the South Bend Cubs staff will reach out to those who have been selected.

The South Bend Cubs open the 2020 season at Four Winds Field on April 9 against the Lake County Captains. Opening Night will feature a special presentation celebrating the 2019 Midwest League Championship. Additional details on the celebration will be released in the coming weeks.

The Fort Wayne TinCaps are set to host auditions to perform the National Anthem before a game at Parkview Field during the 2020 season.

Note: In recent years, all tryout spots have been filled within 24-48 hours. Therefore, if interested in auditioning, schedule a tryout slot as quickly as possible.

Keep in mind, not everyone who tries out will earn an opportunity to perform before a game. Tryout participants will be evaluated by TinCaps staff members and local musicians.

Those who are selected to perform the National Anthem at one of the team’s 70 scheduled regular season games will receive four tickets to the game at which they perform. (Click here for the team’s 2020 schedule.)

With Opening Day at Parkview Field on April 13 less than 70 days away, the Fort Wayne TinCaps have announced their day of the week promotions for the 2020 season. The daily lineup features a combination of past favorites joined by exciting new promotions.

– Select concession items, such as hot dogs, popcorn, and soft drinks, for only $1

The TinCaps are unveiling their full promotional schedule on Facebook, Twitter, and Instagram (@TinCaps) ahead of individual tickets to all games going on sale on Wednesday, Feb. 12 (8 a.m.). Other promotions include fireworks, giveaways, trivia nights, and beverage tastings.

Fans can purchase their tickets at TinCapsTickets.com, by calling 260-482-6400, and in person at Parkview Field. The team is offering a free breakfast to fans who buy tickets at the ballpark between 8-10 a.m. on Feb. 12. In the meantime, season ticket packages and group outings are already on sale.

In advance of single game tickets going on sale on Wednesday (Feb. 12), the Fort Wayne TinCaps have released their promotional schedule for the 2020 season at Parkview Field. The TinCaps have a jam-packed calendar of promotions that begins with Opening Day on Monday, April 13 (6:05 p.m.), and includes celebrity appearances, brand new highlights, and a Minor League Baseball-high 29 postgame fireworks shows.

In 2020, Parkview Field will welcome Leslie David Baker a.k.a. Stanley Hudson from The Office on Friday, July 17, as well as WWE Hall of Famer Ricky “The Dragon” Steamboat for Pro Wrestling Night on Friday, Aug. 21. Two players from the Indianapolis Colts will also be in attendance for Colts At Bat on Thursday, May 14.

Another date many fans will be sure to circle on their calendar is Sunday, July 5, when the first 2,000 fans to enter Parkview Field will receive a Fernando Tatis Jr. bobblehead. The San Diego Padres star shortstop played for the TinCaps in 2017, and at just 18 years old, set the franchise’s single-season record for home runs.

The TinCaps will host their first ever Sensory Friendly Game on Tuesday, July 28, when fans can expect softer music, more spacious seating options, and other accommodations to support families who are affected by sensory-processing challenges.

Other new promotions for the 2020 season include several group trivia nights, plus a theme night dedicated to fans of Jerry, Elaine, George, and Kramer. On top of that, the ’Caps are also introducing coffee to their season-long lineup of beverage tastings.

Meanwhile, the team is still offering many of its most popular past promotions, like Star Wars Night, multiple Princess Nights, Comic Book Hero Night, Wands and Wizards Night, and visits from national entertainers like Jake the Diamond Dog and the ZOOperstars!

As previously announced, 2020 will also feature the debut of other new promotions, such as Paws and Claws Nights on Wednesdays and Días de La Familia, when the TinCaps will take on the identity of Manzanas Luchadoras for select games.

The TinCaps’ 70-game regular season home schedule runs through Labor Day (Sept. 7). Along the way, the team is home on the Fourth of July, Father’s Day, and during the Three Rivers Festival. Click here for the full schedule of game dates and times.

Beginning Feb. 12, tickets can be purchased at TinCapsTickets.com, by calling 260-482-6400, and at Parkview Field. Fans who buy tickets at the ballpark between 8-10 a.m. on Wednesday will be treated to a free breakfast buffet. (Season ticket packages and group outings are already on sale.)

– Turn the Park Pink for the Vera Bradley Foundation for Breast Cancer (Saturday, May 16)

Day of the Week Promotions