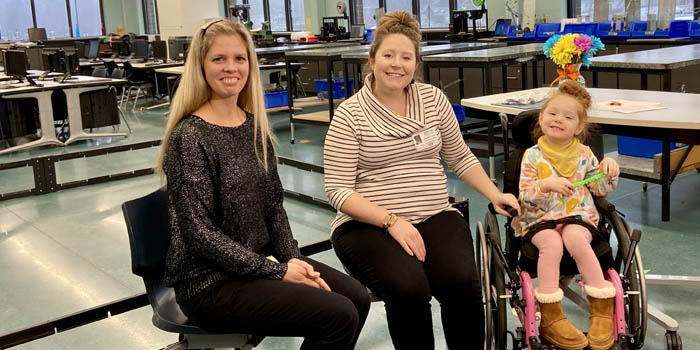 According to a press release from Warsaw Community Schools, Richcreek has gone above and beyond to promote inclusiveness and awareness to the life-changing effect assistive technology can have for all people, no matter how young, through Edgewood’s Go Baby, Go! project.

Richcreek will receive a Starfish Certificate and commemorative Silver Starfish, a feature in Promoting Achievement through Technology and Instruction for all Students (PATINS) Pages eNewsletter, free admission to Access to Education’s statewide fall conference valued at $200 and a Starfish badge.

Richcreek would like to thank PATINS and all who supported the Go Baby, Go! project. She looks forward to future collaborative enterprises with Deputy, Zimmer Biomet, Dalton Foundry and Paragon Medical to make a lasting difference in the lives of students and recipient children.

Richcreek promotes STEM education through her classroom curriculum, after-school clubs and special projects such as “Forget Princess, I Want to be An Engineer,” Vex Robotics Club, Manufacturing Club and Go Baby, Go!

Go Baby, Go! founder Dr. Cole Galloway, a pediatric motor learning scientist and designer, started hacking power wheels to help provide mobility for children with disabilities. His organization has chapters across the country to custom modify cars for children. When Richcreek heard Dr. Galloway speak at a conference, she applied to Kosciusko County Community Foundation and received a 2019 grant to fully fund the materials and the cars for three children.

According to the press release, Elizabeth Hausmann nominated Richcreek for the Starfish Award. Addy Hausmann, daughter of Elizabeth and Stephen Hausmann, received her customized, pink modified 12-volt vehicle in March 2019 at Warsaw’s First Friday showcase. With this gift, Addy has increased independent movement experiences that allow expression, play, socialization and exploration for learning.

Three eighth-grade Edgewood students were interviewed for Richcreek’s surprise announcement. McKale Hagg spoke about Addy as a happy and bubbly toddler. He recalled how during one check-in visit, his team realized that Addy could not access the pedals so they went back to the drawing board to engineer a solution.

“Mrs. Richcreek was a fantastic mentor in this program and really deserves the award,” said Hagg. “She really does go above and beyond.”

Isaac Beam spoke about his older brother, who had been one of Richcreek’s students. That sibling is now an engineer and urged Beam to join the after-school Go Baby, Go! project. Beam voiced that he grew in confidence and became more comfortable sharing his ideas because of this opportunity.

“She really deserves the Starfish Award because she really cares about other people and is a kind-hearted person and just a joy to be around,” said Beam.

Madison Smalley was thrilled to research what Addy liked and then created a custom design for Addy. She found it incredibly rewarding to see the look on Addy’s face when they presented her with a pink and purple car covered in Minnie Mouse decals. Smalley described Richcreek as an inspiring teacher.