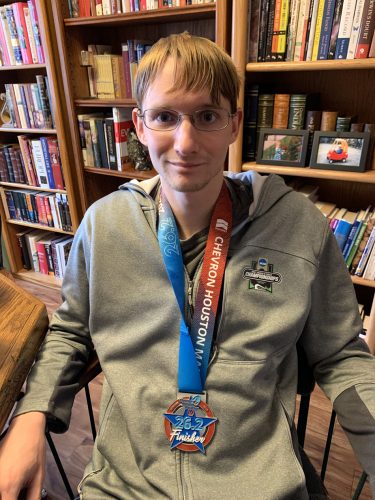 Warsaw Community High School graduate Robert Murphy is preparing for the Olympic trials next month in marathon running. He’s shown here with is medal from the Houston Marathon, where he earned qualification status for Atlanta next month. (Photos provided)

WARSAW – All Robert Murphy ever wanted was a chance. The young man is about to get the chance of a lifetime.

Murphy has qualified for the Olympic trails in late February to compete in the marathon. After a shaky fall season on the streets, Murphy almost lost his opportunity on a technicality.

The dreams of an Olympic qualification surely crosses the minds of most athletes, whether dreaming as a child or becoming an elite prep or collegiate competitor. Murphy began to take his training in track serious after a tremendous high school career as a Warsaw Tiger facilitated college running opportunities at Vincennes then IUPUI.

Upon graduation from IUPUI in 2017, Murphy continued with the Jaguars as a graduate assistant and volunteer coach. His training in the steeplechase was going well, so much so he was within five seconds of national standards. A hitch in the road, however, saw Murphy hit by a car while on a run, which broke his foot.

After returning to Warsaw to live this past May, Murphy continued on the mend and revived his road training, and soon began marathon running. A standout cross country runner, Murphy helped Warsaw to a fourth-place team finish his high school senior season and was ninth in the race. Murphy later went on to collegiate success, but marathon running is much different than anything on the track and trail.

Taking on the Detroit Half Marathon in October, Murphy finished the course in second place and decided to see what a full circuit looked like. At Indianapolis in November, Murphy was on a two-hour, 19-minute pace but ran into cramping late in the race and had to walk portions. He still came across the line at two hours, 26 minutes.

Deciding to see if there was anything there, Murphy entered the Houston Marathon. Where the tenured and highly-ranked runners get preferential treatment in race starts and amenities, Murphy and his father, Jeff, were on their own. Starting in the back of the pack, Murphy didn’t actually start his race for six seconds as the pack worked its way over the start line.

Getting back to his old self, Murphy established a good pace, found a group of fast runners to pace with, and made his way around greater Houston.

“I rented a bike and I rode all over,” stated Jeff Murphy. “I saw him about halfway and he was at a great pace. The next time I saw him was about 10 miles later.” 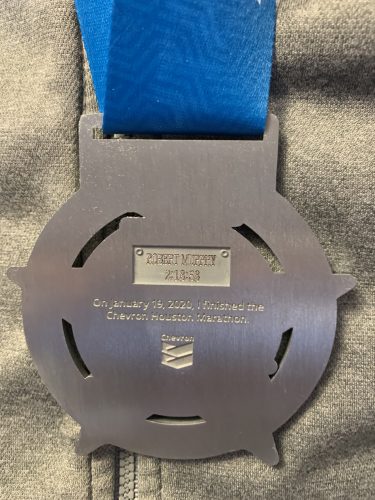 Murphy’s engraved medal from the Houston Marathon, where he finished 20th overall and qualified for the Olympic marathon trials in February.

Robert was well on his way, and didn’t incur the same issues he had in the Circle City. As he approached the finish, the clock was certainly ticking against him. The Olympic trial cut-off time was two hours, 19 minutes. Murphy was speeding in at 2:18:54. 55. 56. 57…

At two hours, 19 minutes and four seconds, Robert Murphy had crossed the finish line. He was 20th overall among all competitors, and the 13th American to cross the line. But, as most runners do, they immediately check their watch and then start doing the math. His watch said 2:18:58.

“When I finished and noticed I barely made the time according to my watch, I was wondering if it was right on,” Robert Murphy said. “My watch could’ve been off or the finishing mat could’ve scanned me different from where I stopped my watch. The point being that I wasn’t absolutely sure if I made the time.”

When reality set in and Houston’s standard remained that gun time is the start of chip time, the Murphys left the Lone Star State frustrated. So close. Just six seconds. It becomes the ‘what if’ game, or ‘where could I have squeezed a couple seconds’?

Then came communication from the good folks with the Atlanta Track Club about an invitation for the Olympic Trials.

Here is your Olympic moment, Robert.

“I was confident that I barely made it, but I didn’t want to get my hopes up,” Murphy said. “After some time passed and a few emails from the officials at Atlanta, I basically knew it was official. If anything, I’m still waiting for the official finish time to arrive from Houston, but they’re already having me fill out travel plans and preparing for a hotel room. So, with that in mind, it wasn’t as necessary for me to debate whether the unofficial time was…well…official.”

Murphy will run Feb. 29 in downtown Atlanta, site of the 1996 Olympics. The trials will originate and complete itself at Centennial Park, the crown jewel of the 1996 Olympic Games, and pass along several high point neighborhoods and city landmarks, as well as by such places as Mercedes Benz Stadium and the Georgia Capitol.