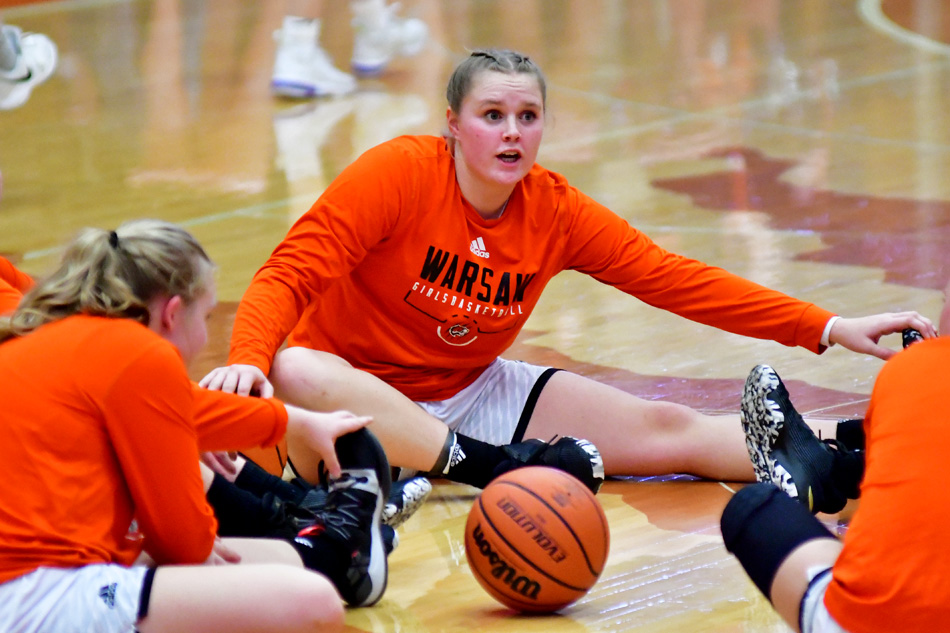 Kaylee Patton and the Warsaw Tigers can sit back and relax until the semi-finals of its home sectional, drawing the bye. The IHSAA released its tournament draws Sunday for 64 sectionals around the state, including Class 4-A No. 4 hosted by Warsaw. (File photo by Mike Deak)

INDIANAPOLIS – Basketball was on the minds of many Sunday, first with the news of Kobe Bryant’s passing, then later with the IHSAA revealing its pairings for the 45th running of the IHSAA Girls Basketball State Tournament.

The state tournament, which will begin across the Hoosier state on Tuesday, Feb. 4, will again host four class brackets and 64 sectional tournaments. There are several hosts from the area, specifically in Class 4-A, where Warsaw is a site host for Sectional 4.

The Lady Tigers will get to kick up their feet and watch six other teams slug it out before it has to lace up the Adidas, drawing the bye until Friday night’s first semi-final. Warsaw will get the winner of the final battle of Elkhart, which will see Elkhart Memorial and Elkhart Central compete one last time Tuesday before merging into Megatron next year. Warsaw and Elkhart whomever meet in Friday’s game one, opposite Wednesday’s winners. The Wednesday matchups will see a pair of good ones, with Concord and Goshen battling for US 33 bragging rights in game one and Penn and Northridge mounting their trusty steeds for a royal battle in game two.

The Warsaw tournament championship, as are all of the tourneys around the state in all four classes, will take place Saturday night at their respective sites. Times for each of the games will be announced by the host schools early this week.

All bets are off in the Class 3-A Sectional 20 at Lakeland. The night opens with the new kids in town, Central Noble, taking on Wawasee. The Cougars are new to Class 3-A after three trips to the semi-state the past three years, two years ago claiming a Class 2-A state title. The favorites on paper, NorthWood, will begin its quest for coach Adam Yoder’s first sectional title with a date against the upstart Tippecanoe Valley Vikings in game two Tuesday night in LaGrange. Lakeland and West Noble got the byes, the host Lakers will play in Friday’s first semi-final against the Wawasee-Central winner, and the Chargers will get either the Panthers or Vikings in game two.

At Culver in the Class 1-A Sectional 50 alignment, Oregon-Davis is likely the favorite. However, as last week showed, anything can happen as O-D was knocked out of the Bi-County tourney in the first round by a sub-.500 John Glenn squad. The Bobcats drew the bye, however, and will await the winner of West Central and host Culver, which open the tourney Tuesday night. In game two the same night is Argos and Triton, the Dragons having beaten the Trojans by 20 early in the season. Triton, however, comes in after reaching the Bi-County finals. LaCrosse will play the Triton-Argos winner in the bracket’s second semi-final Friday night.

Lakeland Christian embarks on its new direction, going from the Fort Wayne area sectional to now the deep south and meeting up with the folks in the North Miami five-team bracket. The Cougars and Southwood meet in Friday’s first contest. Lakeland Christian and Southwood have never met in IHSAA play. Northfield and Southern Wells play in Tuesday’s solo game, with North Miami waiting for that winner in Friday’s second game.

Looking ahead to the regional settings, in Class 4-A, the Warsaw winner will play the Portage champion in game one of the LaPorte four-teamer, with winners from Lake Central and Michigan City playing in game two.

In Class 3-A, Lakeland’s champion will prepare for quality hospitality at Jimtown, meeting the champion from John Glenn in the morning session. Knox and Calumet winners meet in game two.

Northern semi-states are hosted by LaPorte and Logansport, and the IHSAA State Finals are set for Feb. 29 at Banker’s Life Fieldhouse.