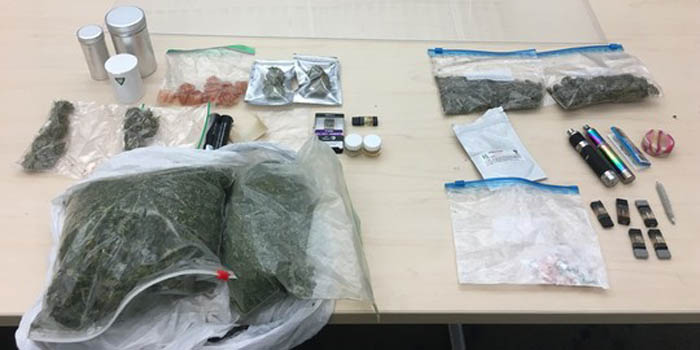 Pictured are items collected during a traffic stop in Steuben County.

MISHAWAKA — Two Indiana State Troopers made two different traffic stops on the Indiana Toll Road on Tuesday, Jan. 21, that resulted in over 2 1/2 pounds of marijuana being located.

According to an ISP press release, just after midnight on Jan. 21, Trooper Benjamin Walker stopped a 2011 Chevrolet for an equipment violation as it traveled west on the Indiana Toll Road, near the 151-mile marker in Steuben County.

While talking to the driver, Ryan Michele Bartlett, 37, Paw Paw, Mich., Walker smelled the odor of marijuana. A search of the Chevrolet led to the discovery of more than 1 1/2 pounds of marijuana, several vape pen cartridges containing THC oil and marijuana wax.

Bartlett was arrested for possession of marijuana and cited for having an expired driver’s license.

A passenger in the Chevrolet, Kevin Cutrer, 58, Benton Harbor, Mich., was arrested for possession of marijuana and possession of paraphernalia. Bartlett and Cutrer were both taken to the Steuben County Jail.

In an unrelated case, around 10:40 a.m. Tuesday, Jan. 21, Trooper Keith Doyle stopped a 1997 Nissan for several moving violations as it traveled east on the Indiana Toll Road, near the 84-mile marker in St. Joseph County.