District 22 State Rep. Curt Nisly has once again introduced legislation that would ban all abortions in Indiana. The bill would legally define the act of abortion as murder and would allow for the arrest of federal officials who try to intervene. 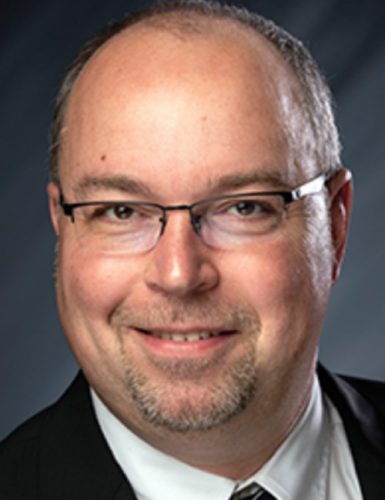 The bill, HB 1089, allows for federal officials who take action to uphold prior law would be subject to arrest by Indiana law enforcement.

The bill also states that any court decision to strike down the law will be treated as “nonauthoritative, void and of no force.”

Planned Parenthood of Indiana and Kentucky quickly responded after the bill was filed. A statement from the group reads in part:

“It’s clear Rep. Nisly is emboldened by the Trump administration and the spate of anti-abortion attacks across the country and will stop at nothing to strip Hoosiers of their rights and freedom. HB 1089 goes so far as to demand that the state ignore any court rulings that strike down the law – a blatant and outrageous disregard of separation of powers and legal precedent.”

The Republican lawmaker, who will face a primary challenge by Bill Dixon, has filed previous anti-abortion bills, but Republican leaders have refused to give those a hearing.

INDEPENDENT STREAK – Local Democrats have apparently been grumbling about Mayor Joe Thallemer’s appointment of Chris Plack to the Oakwood Cemetery Board. They thought it should have gone to a Democrat.

Asked about that Friday, Thallemer said he’s not required to appoint a Democrat and that he can choose from other political parties such as a Libertarian or independent.

Plack ran unsuccessfully last year for city council and did so as an Independent, which irked Republican leaders. Plack was a longtime Republican and even did some campaign work years ago for Sarah Palin during her run for governor of Alaska. He ran as an independent last year, he said, to make sure voters had a choice. He lost to Josh Finch for the District 2 seat.

“I don’t know how much more independent you can be,” Thallemer said about Plack.

The cemetery board is made up of four members (yes, four!) and state law requires no more than two be from the same party, Thallemer said.

EXOTIC LEGISLATION – Former Warsaw City Councilwoman Trish Brown, who is executive director of Black Pine Animal Sanctuary, is scheduled to testify in Indianapolis Tuesday on behalf of a bill that would ban private ownership of “dangerous wild animals.”

State Rep. David Abbott, whose district includes the sanctuary, is sponsoring HB 1200, which would prohibit the private ownership of carnivorous animals within the state of Indiana. The bill would also prohibit the declawing or removal of the canine teeth of an exotic or dangerous wild animal unless necessary for the treatment of a medical problem.

Brown is working with the Humane Society of the United States on the bill.

The point of the bill is “so Joe Shmoe down the street can’t go out and decide to keep a tiger in his back yard,” Brown said.

The House Natural Resources Committee will hear the bill at 10:30 a.m. Tuesday.

OVER THE TOP – Last Saturday, I attended part of a discussion hosted by Indiana Liberty Coalition about the sexualization of children in public schools. The event, scheduled for five hours, attracted about 80 people (at the beginning) to the Silver Lake Community Center. 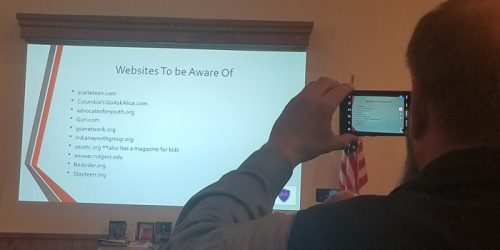 One of about 80 people snaps a photo during a slide presentation during the meeting Jan. 11 near Silver Lake. InkFreeNews photo by Dan Spalding.

Rhonda Miller, president of the coalition, led the discussion that focused for a while on the impact of the Kinsey Reports from six decades ago. The presentation then turned to examples in other countries and a list of local schools that have allegedly crossed the line by using materials that oversexualize sex education and often encourages sexual activity.

Miller warned of many groups that support comprehensive sex ed. Teacher unions, public schools, the United Nations, the ACLU, Bill and Melinda Gates and George Soros were part of a long list.

I stayed for about 90 minutes and had hoped to hear more about transgender policies in public schools since it’s a hot issue in North Manchester and elsewhere. I imagine they did get there eventually.

While the group offered some good advice to those concerned about the issue, there was also a strong hint of conspiracy. In one fell swoop, Miller summarized the situation this way:

The comment certainly seemed to reference the defunct conspiracy that surfaced during the 2016 presidential campaign claiming Hillary Clinton was tied to a sex trafficking operation.

As I left, I hoped those well-intended folks can discern between fact and fiction.