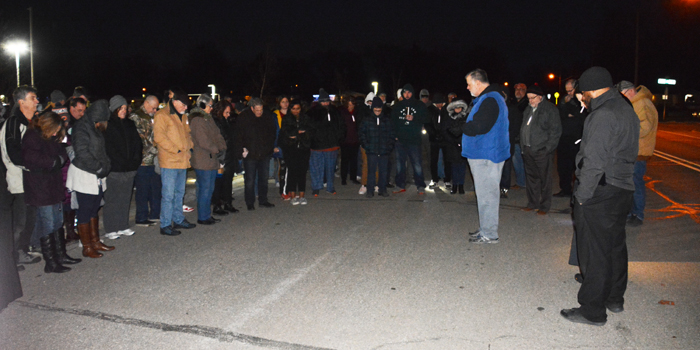 A large turnout of people attended a prayer vigil outside of Lincoln Elementary School in Warsaw on Monday, Jan. 6, in light of alleged First Amendment violations. InkFreeNews photos by Liz Shepherd.

WARSAW — About 200 people attended a prayer vigil outside of Lincoln Elementary School on Monday, Jan. 6, after an area atheist group made a complaint to Warsaw Community Schools regarding alleged First Amendment violations.

The large group gathered on a sidewalk to the east of the school, many holding glow sticks while several pastors spoke. Steffanie VanCuren Hupp, the organizer of the event, spoke briefly before prayers began and explained the incidents that occurred within Lincoln Elementary School. She also said that she used to work at the school and wished to support the teachers involved.

“We are not defeated,” said Hupp. “The First Amendment doesn’t say anything about separation of church and state.”

On Monday, Dec. 30, Troy Moss, Northern Indiana Atheists, wrote a letter to WCS Superintendent Dr. David Hoffert addressing the issues. The letter lists what the group considers to be three specific violations of the constitutionally protected separation of church and state. The first incident involved a teacher reading a book to her second-grade classroom about a candy cane representing Jesus and about Christmas being about the birth of Christ. The second complaint involved a second teacher who read a book titled “The Crippled Lamb,” which delivers a message about how God has a unique plan for everyone. The third complaint involved students watching a religious movie last year called “The Star,” a Christian cartoon about the birth of Jesus.

The letter asks Hoffert to provide the NIA with a written statement with steps the school district intends to take to remedy the complaints.

The school corporation has not responded publically to the allegations.

Pastor John B. Lowe, New Life Christian Church and World Outreach, was one of the first to speak at the vigil.

“It amazes me how in this country you can say Muhammad, Buddha, and anything else, but if you say Jesus Christ, people get upset,” said Lowe.

During the prayers, several of the pastors asked for blessings for the community overall, as well as the teachers involved in the incidents.

“This is not just a one-church thing, this is a body of Christ,” said Lowe. “That’s what we’re really here to do is love God and love people. Don’t forget to pray for all those folks involved in this and let’s not forget to pray for ourselves. We never respond with hurt, anger and hatred. The greatest power we have is love.”

The vigil ended with the crowd singing a rendition of “Amazing Grace.” 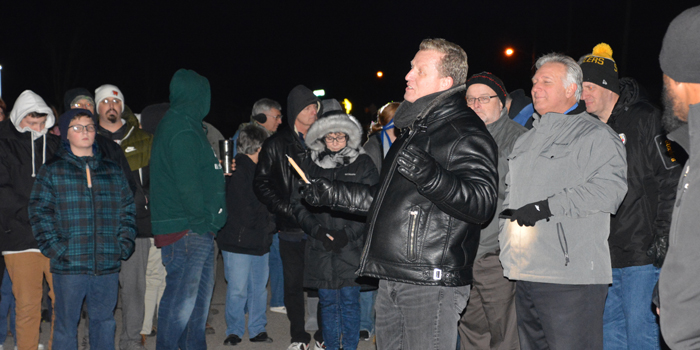 Pastor John B. Lowe (C) addressed those at the vigil.