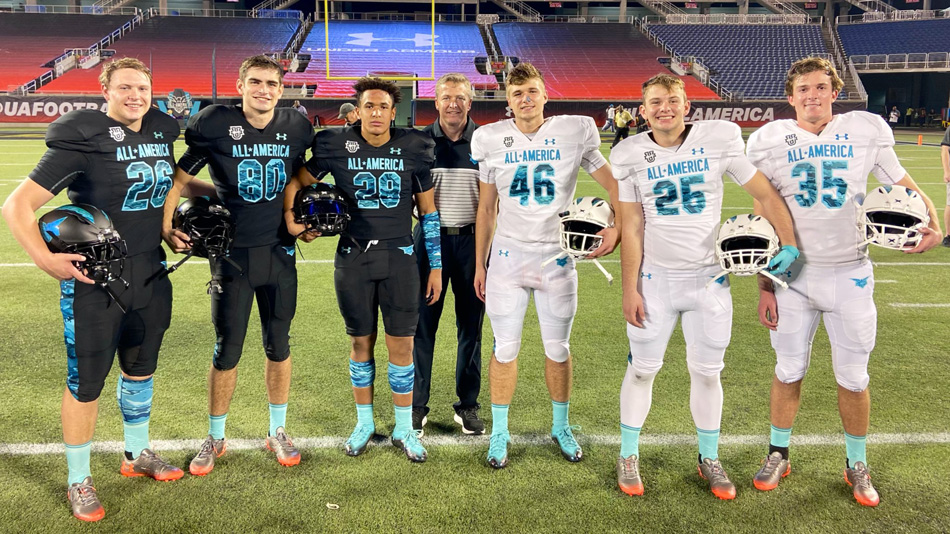 Warsaw’s Harrison Mevis, far left, was one of six kickers to take part in the Under Armour All-American Game Thursday night. (Photo via Kohls Kicking Twitter)

Football news and notes during the postseason involving area players and teams.

Harrison Mevis hasn’t been shy about wanting to kick on the big stage. The Warsaw senior certainly had the platform Thursday night.

Mevis was six-for-six in his chances, hitting three field goals and three extra points, to help his Team Pressure defeat Team Savage, 30-24, in the Under Armour All-American Game in Orlando.

Mevis was 3-3 in extra points and hit field goals of 36, 35 and 35 in the showcase event for the highly rated prospects entering college next fall. Mevis, who set a handful of scoring records for Warsaw this fall and over the course of his career, is signed on to continue his football career at the University of Missouri.

Tennessee sure knows how to get out of a huge hole.

The Volunteers scored twice in a 30-second span late, using an onside kick to help escape a 13-point deficit, and then held on to stun Indiana 23-22 in the Gator Bowl on Thursday night.

The rally was indicative of Tennessee’s season, which started 1-4 and ended with six consecutive wins.

“Everybody in the country had given up on these guys,” second-year coach Jeremy Pruitt said.

The Hoosiers (8-5) looked to be in control in the second half after scoring two touchdowns in a 1:03 span, the second one coming on Jamar Johnson’s 63-yard interception return, and later adding a pair of field goals.

Quavaris Crouch scored on a 1-yard plunge and then fellow running back Eric Gray recovered a surprise onside kick that barely went the mandatory 10 yards. Gray scored from 16 yards out a few plays later to put the Vols on top for good.

“Obviously, very very disappointing to have a fourth-quarter lead and let it slip away,” said Indiana coach Tom Allen, whose team was seeking its first nine-win season since 1967. “I’m not going to sit here and point fingers and blame. At the end of the day, it’s my responsibility for us to find a way to win the game. We didn’t do that.”

Gray was named the game’s Most Valuable Player.

“It’s amazing,” he said. “When adversity hits, you got to put on more steam.”

Logan Justus missed an extra point in the third quarter that turned out to be costly and was wide right on a 52-yard field goal attempt with 2:12 remaining. Justus’ kick had the distance but sailed just outside the right upright.

Tennessee punted with 1:02 remaining, but Indiana failed to get back into field goal range.

The Hoosiers have to find a replacement for offensive coordinator Kalen DeBoer, who stayed for the bowl game after getting the head coaching job at Fresno State. DeBoer gets much of the credit for Indiana’s offensive turnaround.

Tennessee: Jarrett Guarantano is far from guaranteed to be the team’s starting quarterback next season, especially after a two-interception performance. The Vols signed Harrison Bailey from Marietta (Ga.) High, and the incoming freshman is expected to enroll this month and compete for the job in spring practice.

Allen had a game-management issue that might have cost his team points.

The Hoosiers moved the ball to the 6-yard line in the waning seconds of the first half, but instead of calling timeout, Allen had Peyton Ramsey line up and spike the ball with 3 seconds remaining. They could have used their final timeout much earlier, taken a shot into the end zone and still had time for a field goal.

Indiana played its second consecutive game without leading rusher Stevie Scott. Scott warmed up with teammates, but did not play. Tennessee linebacker Daniel Bituli injured his right eye in the third quarter, returned on the next series and could be seen covering it with his hand to get calls from the sideline. Indiana tight end Peyton Hendershot injured his right short on a tackle but later returned.

Injured quarterback Michael Penix and several other offensive starters return next season, which begins with Indian’s toughest road opener since playing at then-No. 7 Notre Dame in 1991. The Hoosiers open at Wisconsin on Sept. 5.

A year removed from an appearance in the CFP national semifinals, the Fighting Irish closed out another double-digit win season with arguably their best all-around performance in a 33-9 victory over Iowa State on Saturday.

“I’m just so proud of our football team. 2019 will be one that I’ll always remember, for a group of guys that just loved to play the game. They had such a strong brotherhood,” coach Brian Kelly said.

“They did not listen to what the naysayers had to say about them. The negative tone, the negative people out there. All they cared about was playing the game,” Kelly added. “It was clean. It was about competing. Always looking to better themselves.”

Ian Book threw for 247 yards and a touchdown, Tony Jones Jr. scored on an 84-yard run and game MVP Chase Claypool had seven receptions for 146 yards and a TD for the Irish (11-2, No. 15 CFP), who finished on a six-game winning streak after losing to Michigan to tumble out of contention for a playoff berth in late October.

Notre Dame also lost to Georgia in September; however, Kelly said the team remained focused and continued to focus and get better.

“Even this week. ‘Notre Dame is not ready to play.’ They used that as another form of motivation to show people wrong, They just read this team wrong,” Kelly said. “It’s just so satisfying that this group has been rewarded with 11 wins. … They overcame adversity, lived the life lessons of it. They’re not perfect. They never pretended to be perfect and never wanted to be, but always strived for excellence.”

Book completed 20 of 28 passes without an interception, including a 27-yard TD throw to Claypool, who went over 1,000 yards receiving for the season and also recovered a fumble on special teams to set up an early field goal.

The Fighting Irish had 26 takeaways during the regular season, including a nation-leading 17 fumbles. The defense set the tone from the start against one of the Big 12’s top passing attacks and never really allowed the high-scoring Cyclones to establish a rhythm offensively. As expected, the 6-foot-4, 229-pound Claypool was a difficult matchup for Iowa State’s smallish secondary. The Irish also outrushed the Cyclones 208-45, with a huge chunk of that advantage being built on Jones’ long scoring run.

The Fighting Irish have won 10 or more games in three consecutive seasons for the first time since 1991-93. Book is a senior but has a year of eligibility remaining. Coach Brian Kelly faces some tough decisions for 2020, including naming an offensive coordinator after parting ways with Chip Long earlier this month. Quarterbacks coach Tommy Rees called plays in the Camping World Bowl. The Irish open next season against Navy in Dublin, Ireland, on Aug. 29.