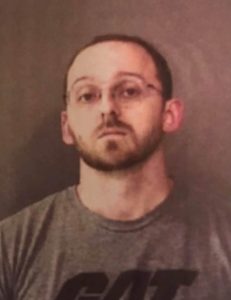 WARSAW — A North Webster man was sentenced to six years in prison on Thursday, Dec. 19, after taking inappropriate pictures of children in lingerie.

On Aug. 31, an officer with the Kosciusko County Sheriff’s Office received a report that Rex had been taking inappropriate pictures of two children at his home in North Webster.

According to court documents, one of the children told the officer that Rex took her to dinner and purchased some vape cartridges for her. Rex then took the child to his home and told her if she didn’t want him to take pictures of her that she would need to pay him for dinner and the vape cartridges.

The child said Rex showed her multiple pictures of another young girl dressed in lingerie. Rex told the child that he and the girl in the pictures had sexual intercourse. The child told the officer that since the first incident, she had gone out for dinner with Rex two or three times and that Rex took pictures of her in lingerie.

The girl in the pictures said she and Rex had intercourse on two occasions.

Another child said on Aug. 30, Rex took her out to dinner and then took her to purchase lingerie. Once back at Rex’s residence, he took pictures of the child in lingerie.

Rex told the officer that everything the children said actually happened and went into detail, describing each incident.

During sentencing, several victim impact statements were delivered. The father of one of the children was the first to speak.

“Pain, anger, hurt and confusion doesn’t even describe this,” said the father. “She was embarrassed and had emotions she should never have to feel.”

The father of two children in the case spoke next, asking Judge David Cates to “put this monster away for every second you can.”

“I am living in fear this might happen again whenever they go out,” he said.

Chief Deputy Prosecuting Attorney Brad Voelz read a letter from one of the girls involved in this case.

“My life has been impacted by this, and I’m scared to be alone with a guy,” said Voelz. “I even get anxious when a guy touches my arm. I feel violated.”

One of the children also spoke. “This situation has changed my life entirely,” she said. “I can’t be alone with guys. I don’t know why you did this and I will never know. I am not sorry for speaking out about this, and I hope you receive the help you need.”

“What’s encouraging is people having the courage and strength to come forward,” said Voelz. “This has made our community safer.”

While in court, Rex apologized for his behavior, describing his actions as “appalling.”

“I betrayed my family and closest friends,” said Rex. “I am sorry beyond belief.”

“You were in a position of trust that you violated,” said Cates. “These were multiple victims and repetitive acts. I think you’re sorry for getting caught.”