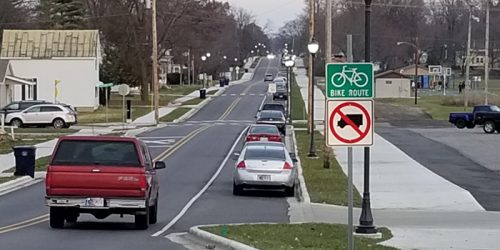 A motorist heads east on the newly constructed portion of East Market Street in Warsaw. The road recently fully reopened after a 13-month project. InkFreeNews photo by Dan Spalding.

WARSAW – From a motorists’ standpoint, the reopening of East Market Street following a 13-month reconstruction project now provides motorists with a long smooth drive from Argonne Road to Hickory Street.

City officials and bicycling enthusiasts, though, see the second phase of Market Street reconstruction as another step in the longterm goal of establishing a pedestrian-bicycle path from The Village in Winona Lake to the City-County Athletic Complex west of Warsaw.

Phase two extended from Bronson Street to Hickory Street and was funded with $1.7 million in federal money.

Construction of phase two wrapped up a few weeks ago and officials on Tuesday, Nov. 26, marked the progress with a ribbon-cutting in the middle of the road that momentarily halted traffic. 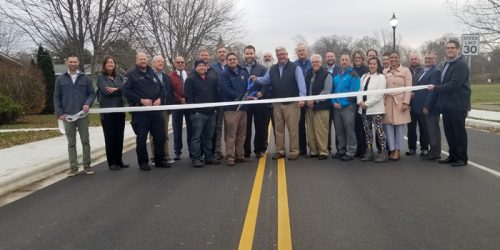 Representatives of the city of Warsaw, Winona Lake, Kosciusko Chamber of Commerce and Indiana Department of Transportation were among those to help cut a ribbon on Market Street Tuesday afternoon, Nov. 26.  Mayor Joe Thallemer and City Plan Director Jeremey Skinner held the ceremonial scissors. InkFreeNews photo by Dan Spalding.

Combined with the first phase, the 1.5 miles of reconstructed roadway include new curb, pavement, reworked underground utilities, an extra-wide sidewalk on one side to accommodate bicyclists and more than 70 new tall, ornamental street lights that are brighter than the old ones.

“We’ve now got that connection from the town of Winona Lake to our downtown,” Thallemer said after the ribbon-cutting.

Thallemer called it a community project that will offer “fabulous connectivity.”

Better lighting and altered lane configurations that are part of the road’s redesign will make it safer, officials believe.

“One of the biggest improvements is the safety that this is going to create for kids crossing the streets – slows down the traffic being a little bit narrow,” Thallemer said.

The 7.5-mile path from Winona Lake to the CCAC is dotted with several trailheads and parks.

The biggest public area on the route is on Market Street and includes Fribley Field and the adjacent Richardson-Dubois Park which has seen upgrades in recent years. Officials are also discussing moving the skate park from its home in Boggs Industrial Park to where the Liz Frazier softball field sits west of Richardson-Dubois.

The ribbon-cutting took place in front of Richardson-Dubois. Among those attending were representatives of Indiana Department of Transportation, the city plan office, Kosciusko Chamber of Commerce, the town of Winona Lake and members of the Ride Walk Advisory Committee.

City officials are already eyeing a third phase of road construction that would continue west on Market through the downtown to Columbia Street. Preliminary engineering has been done, but how officials will incorporate either a wider-than-normal sidewalk or a dedicated lane for bike traffic has not been determined yet.

At the same time, Winona Lake officials are planning for the construction of a roundabout where Winona Avenue, Kings Highway, Argonne Road and Park Avenue all intersect. The redevelopment of that area is expected to accommodate the bike route.

“We’re excited to see this phase completed and continue working with Winona Lake on the roundabout and improving the safety connections into Winona Lake and then – in the future – our connection within and through the downtown as well,” said City Plan Director Jeremy Skinner.