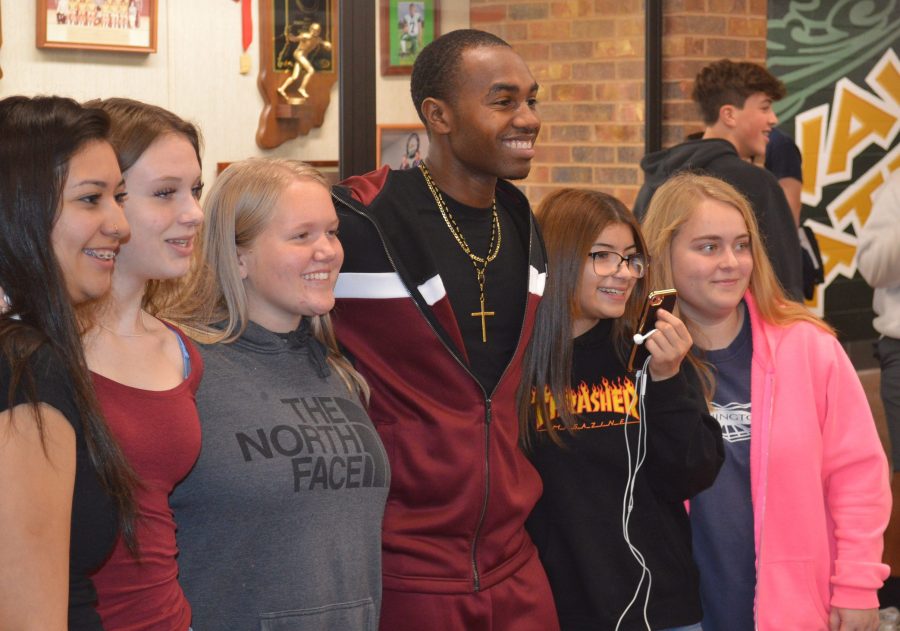 Actor Moses Jones took a few minutes to pose with Wawasee High School students for photos after he spoke at a school wide convocation Thursday, Oct. 31.

SYRACUSE — “Safer does not mean safe.” It was a message repeatedly emphasized by actor Moses Jones, who travels extensively to warn teens about the dangers of vaping through the use of e-cigarettes.

He spoke at “Sweet Deception,” a school wide convocation Thursday morning, Oct. 31, at Wawasee High School then spoke in the afternoon at Wawasee Middle School. His appearance was sponsored by Voice, an organization seeking to empower and educate teens about celebrating a tobacco-free lifestyle.

Jones, who grew up in Indiana and attended Indianapolis Tech High School, said “this thing is running rampant in schools,” referring to vaping, and focused upon a Juul, a specific type of e-cigarette that is popular nationwide.

He said e-cigarettes deliver nicotine to youth in the form of a vapor that is “just as harmful as smoking.” He said research has shown one Juul contains as much nicotine as a full pack of cigarettes.

A Juul looks similar to a computer flash drive. “It attracts many who have never smoked,” Jones said, in part because it looks like a tech product.

He noted there is still much not known about the long term health effects of vaping, but it is known it weakens the blood vessels and damages the immune system. “And you are four times more likely to use cigarettes,” he said.

“The bottom line is there are no safe tobacco products,” he added.

A reason for concern specifically about the Juul is it is easy to conceal and “nobody can really tell what it’s made of,” Jones emphasized.

E-cigarettes are being marketed as not containing nicotine, being safer than smoking a cigarette and, it is said, targeted mainly to adults. But Jones emphatically denied this, saying “E-cigarettes do have nicotine, are not safe and are marketed to kids.”

A survey showed slightly more than 18 percent of youths in Indiana have used e-cigarettes, higher than the national average. This comes after tobacco use had dropped below 6 percent nationally in recent years.

Jones said there is no social stigma attached to vaping as of yet like there had been with the use of cigarettes.

Geoff Walmer, principal of the high school, said after the convocation Wawasee is not alone in dealing with the problem of vaping. He noted it is something schools across the country are dealing with. The U.S. Surgeon General has declared the use of e-cigarettes to be a national epidemic among youth and three vaping-related deaths have been reported in Indiana by the Indiana State Department of Health since Sept. 6.

Vaping devices can be easily concealed and used quickly, he said. “And they (students) don’t smell like smoke,” after vaping, he added.

Another concern is a “dab pen” or a vape pen with a coil inside that is dabbed with THC, a substance found in marijuana. Then it is heated up to produce a vapor so “you are inhaling straight THC,” Walmer said.

Since e-cigarettes have only been marketed heavily for roughly less than four years, many people are not aware of what they are and what they contain. “My first time seeing a Juul was at the school,” he said.

Walmer said “we are trying to educate kids and adults,” about vaping and, as an example, packets of information are available at various locations in the high school building. Those packets are provided to the parents of students who are caught using e-cigarettes.

He said social pressures among teens can cause some to try vaping because they are afraid they won’t be accepted by their peers if they don’t try it. “We encourage parents to do research on vaping,” he said. “Parents, be aware of social pressures your children face with regards to Juuling and vaping.”

Wawasee’s policy on the use of tobacco also includes the use of e-cigarettes and students caught vaping are “treated the same as tobacco/nicotine users,” Walmer said.