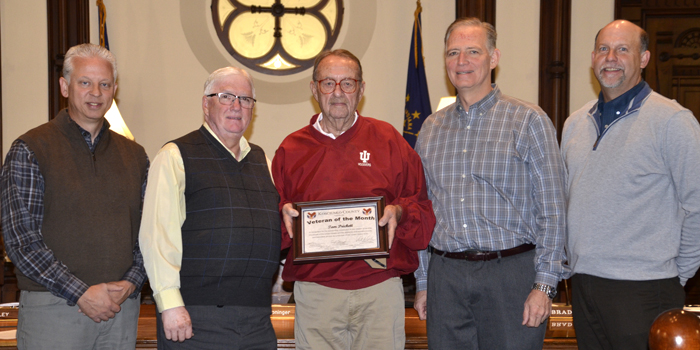 WARSAW  — Tom Prickett, Syracuse, was honored as Veteran of the Month at the Kosciusko County Commissioners meeting on Tuesday, Oct. 29.

Prickett was born in Nappanee in 1934. He graduated from Syracuse High School in 1952 and was drafted into the Army in September 1956.

Prickett was assigned to U.S. Army Garrison Vicenza, Italy, where he spent two years as an Army cook. Once he was honorably discharged in 1959, he returned to Syracuse where he began working at Tom’s Socks Sportswear. He went on to purchase the business four years later. Prickett ran the business for 16 years before selling it.

He obtained a real estate license, which he held for 43 years.

He married his wife, Vicki, in 1995. That same year, the couple opened their own real estate office. Tom is the father of Mary Ellen Prickett. He has two grandchildren, Zoe Ellen White and Lola Mae Baker, and a great-grandchild, Dallas Allen Kinney.

Prickett is former president of Syracuse Wawasee Rotary, Syracuse Town Board, Flotilla Committee and Syracuse Wawasee Chamber of Commerce. He is a member of the Masonic Lodge, Scottish Rite, Mizpah Shrine.