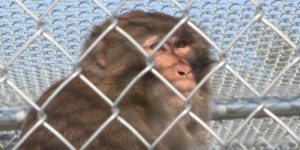 PULASKI COUNTY — A home for retired research monkeys in the middle of Pulaski County is expanding.

The Peaceable Primate Sanctuary in Winamac takes care of 32 baboons and macaques and now more are on the way.

Scott Kubisch opened the Peaceable Primate Sanctuary three years ago. It has been growing ever since.

The primates come from research and rescues. The sanctuary allows them to live out their retirement with good food and good care.

One new building, will house three baboons which will be transported from a wildlife sanctuary in California later this year. Kubisch says the baboons are older and have medical issues.

The wildlife facility where the animals are living right now contacted Kubisch after it learned it would shut down.

“Definitely dire. The sanctuary where they are currently living is going out of business. They have run out of funds — mismanagement. So animals there need to be placed in home immediately in a very short amount of time. So currently they have about 400 animals that need to be placed — various primates, big cats, a lot of birds. The three baboons need to go pretty quick,” says Kubisch.

Kubisch will travel to get those baboons and drive them back to his Winamac sanctuary.

The second new building at the sanctuary being constructed right now will house 15 to 20 macaques. Kubisch says those monkeys will be coming from two research universities — including Princeton. The primates are being retired from research and they cannot be returned to the wild.

“So the majority, if not all of the primates we have here have all been what we call captor bred. So they have been bred at the university. So they have never really known the wild. All they have really known is life in the lab or the sanctuary. So, we do the best we can. We try to give them as much of a wonderful life with friends to play with, fresh air, lots of toys, good food and good vet care. That is the best we can do,” says Kubisch.

Kubisch says universities like Princeton help with construction costs of the buildings and fund the long term care of the animals. The building will be done by the end of the year and the monkeys will be arriving soon after that.

You can read more about the Peaceable Primate Sanctuary on its websiteand Facebook page.