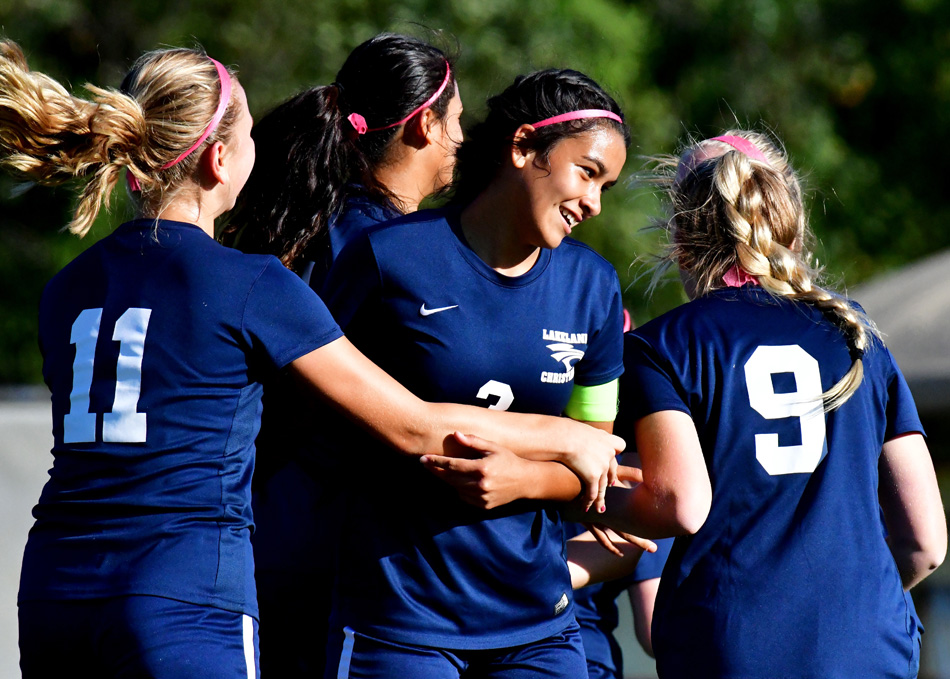 Tori Calizo and Lakeland Christian Academy will begin its sectional title defense in two weeks against Elkhart Christian at the Westview Soccer Sectional. The IHSAA announced its brackets for both the girls and boys tournaments Sunday evening. (File photo by Mike Deak)

In each case, the sectional hosts will announce dates and times for its tournament games early this week.

In the boys sectional draw, the ultra-competitive 3-A Northridge sectional has No. 7 Warsaw drawing the first game right out of the chute, taking on bitter rival Concord. No. 14 Northridge, which will meet Warsaw Thursday night for a shot at a slice of Warsaw’s NLC full title grab, will get the Warsaw-Concord winner. No. 18 Penn and Elkhart Central along with No. 20 Goshen and Elkhart Memorial meet on the other half of the Northridge bracket.

Wellfield Park is the home for NorthWood’s Class 2-A sectional. The host No. 12 Panthers will get a shot at some redemption, taking on the No. 14 West Noble side that knocked them out of the sectional last fall. That winner will take on the advancer of Lakeland and Angola. Drawing the bye game is Wawasee, which will take on a Garrett team that Warrior fans still have a bitter taste about after the Railroaders won the 2017 sectional over Wawasee at Warrior Field.

The Class 2-A Culver Academy sectional has Tippecanoe Valley looking to pull some upsets. Its first quest would have to be against the host Eagles, which Valley draws in game two. Rochester and No. 4 Fort Wayne Concordia open the bracket and will meet the Valley-CMA winner. On the bye draw are Fort Wayne Canterbury and No. 9 Manchester, the Squires featuring the most prolific scorer in the country in Harley Kruschwitz.

The four-team Class 1-A Fort Wayne Blackhawk sectional has Wabash and No. 6 Lakewood Park meeting in game one. In game two, the host Blackhawk will meet Parker Stewart and Lakeland Christian, Stewart among the top five scorers in the state heading into the final week of the regular season.

The next step in regionals have the Northridge winner going to Penn for the regional to meet the Valpo winner. South Bend Adams and Munster winners open the regional. The NorthWood sectional champion will head to Marian for the regional, taking on the Marian sectional champ. West Lafayette and Griffith champs also come to Mishawaka. The CMA champion will get the Heritage winner, opposite Yorktown and Oak Hill champs at the Oak Hill regional. Argos will host the 1-A regional, getting Bethany and LaVille winners, then the Argos and Andrean winners.

Northern semi-states will be at Kokomo and South Bend St. Joe.

Moving to the girls side of the equation, Class 3-A’s Warsaw sectional has the host No. 18 Tigers playing in game one against Fort Wayne Wayne. That winner will get Fort Wayne South Side in one semi-final, the other semi-finalist will come from either Huntington North or No. 11 Homestead.

The Class 2-A Lakeland sectional will have the host Lakers taking on Angola for a chance to meet either West Noble or NorthWood, which play game two. The bye game will have DeKalb and Wawasee exchanging acquaintances.

Lakeland Christian’s defense of its first-ever sectional in any sport will have some time, as the Cougars drew the bye game at the Class 1-A Westview sectional. LCA and Elkhart Christian are the second semi-final. Lakewood Park and Central Noble open play at Westview, followed by a good matchup between the host Warriors and No. 13 Bethany Christian. Those two winners will meet in the bracket’s first semi-final.

Warsaw’s girls champion will head to Logansport to play the Harrison champion, with East Noble and Hamilton Southeastern winners joining the four-team group. Wheeler and Lakeland champions will meet in game two of the Plymouth regional in Class 2-A, having watched the Hanover Central and Plymouth champions already squared off in game one. LaVille will host the 1-A regional again, with Argos and Westview winners in game one and Covenant Christian and Boone Grove champions in game two.

Northern semi-states will be at Kokomo and South Bend St. Joe.

The IHSAA State Finals for both boys and girls soccer will be Nov. 1-2 at Fishers High School.