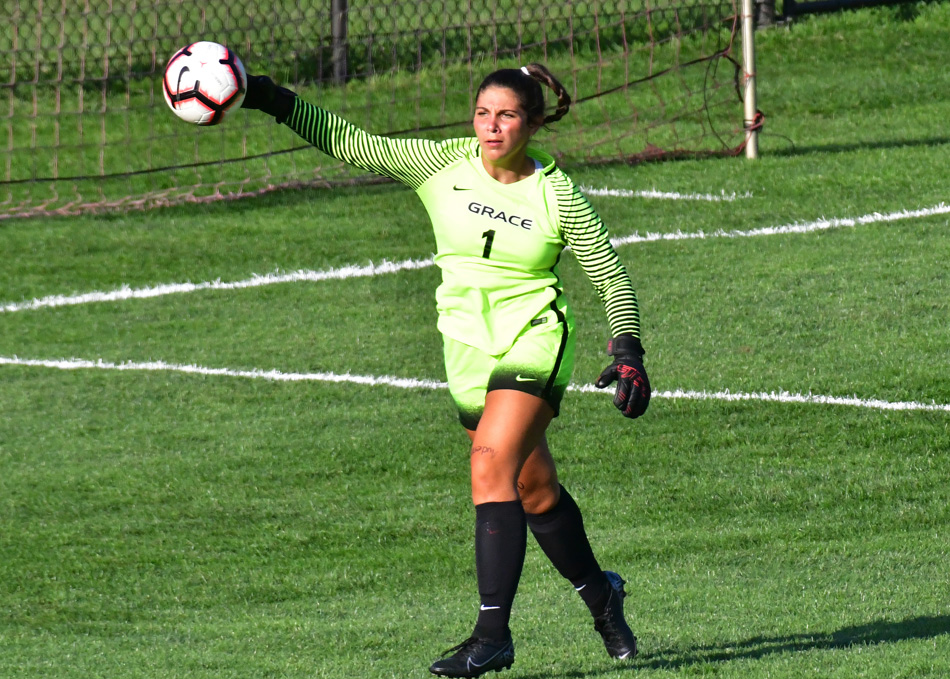 Bethany Blackwood was among four Grace athletes named to a weekly award in their sport this past week. (File photo by Mike Deak)

WINONA LAKE – Grace College had a host of athletes earn conference and national weekly honors this past week for their play in their respective sports.

A pair of Grace College soccer players won player of the week honors.

Blackwood posted two shutouts in two games last week. She made eight saves in 180 minutes as Grace’s goalkeeper and has three shutouts already this year.

Blackwood made several key stops in the second half against Graceland to preserve a 2-0 victory. The Lady Lancers are currently undefeated and ranked No. 15 in the NAIA.

Salo made nine saves in 200 minutes of action last week. His standout game was against No. 25 Southeastern, where he saved five shots in 110 minutes to preserve a 1-1 draw. The Lancers are currently 2-1-1 on the season.

Marshall Keeping It Near The Pin

Following the best tournament in team history, Anna Marshall was honored at the national level.

Marshall was named the NCCAA National Golfer of the Week for Grace’s women’s golf team after her performance at the IWU Invitational.

Marshall won in a playoff to claim medalist honors at the IWU Invitational. She finished the weekend with a score of 146 for a program record. Her 146 beat Grace’s previous best for 36 holes by four strokes.

Her two rounds of 73 tied for the second-lowest rounds of golf in program history. The tournament was highly competitive, featuring four teams either ranked or receiving votes in the NAIA.

Galvan All Fired Up

After a perfect week on the courts, Fabricio Galvan was named the Crossroads League Player of the Week for Grace’s men’s tennis team.

Galvan fueled a 4-3 upset for Grace over No. 17 Northwestern Ohio. He scored wins at No. 3 singles and No. 3 doubles over his opponent.

He ended the week with a 4-0 record after picking up two more wins during Grace’s 6-1 victory against Goshen.

The Lancers are currently 3-0 with a 2-0 mark in league play.