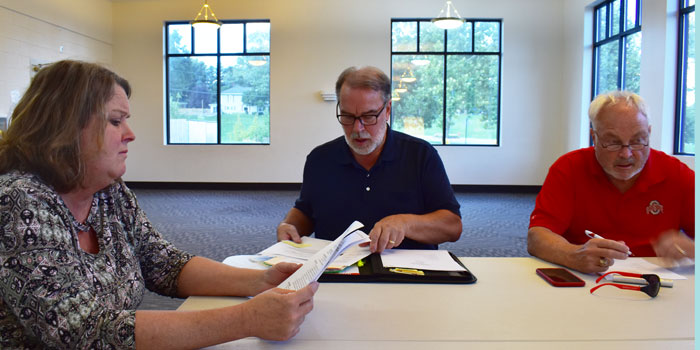 SYRACUSE — During its meeting Tuesday, Aug. 27, the Syracuse-Wawasee Park Foundation reviewed finances and a report from the Kosciusko County Community Foundation in regards to the Syracuse Community Center endowment, which it manages.

Foundation treasurer Tom Edington talked about the finances from the month ending July 2019, which included funds for the Syracuse-Wawasee Trails. He noted the Conklin Bay trail project had the addition of $1,018,267 from a state grant.

Edington and Chad Jonsson, park superintendent, shared the foundation’s designated Charles Schwab fund, which is for trail maintenance, has been transferred to Edward Jones, where the community center’s account is managed.

“It was originally a donation of stock,” Jonsson said, adding the stock had been cashed out but was just sitting there. “It now should be making a little bit of money.”

Kosciusko County Community Foundation’s report covered July 1, 2018, through June 30, 2019. The amount available for distribution is $29,261.47. This could be used for future community center projects.

“This (endowment) was essentially set up when the Kiwanis decided to sell the bricks that are out here in the front (of the community center),” Jonsson said.

Jerry Wright, foundation president, updated foundation members on the trail committee, stating it went through 31 or 32 applications for a new executive director for the Syracuse-Wawasee Trails and has narrowed the pool to six candidates.

Edington said, “I think they are going to do a phone screening with those six.” This will be done to gauge interest in pay scale and relocation. “Get that down to a few to interview and have someone (brought) in as soon as possible.”

Edington added, “They say the economy is so good that if they order materials when you sign the papers and were set to do it, it would be six weeks to two months before they had all the materials ready to go. And of course once you have the materials, you then you have to worry about (getting) the people to do that. The workers and materials are in short supply right now.”