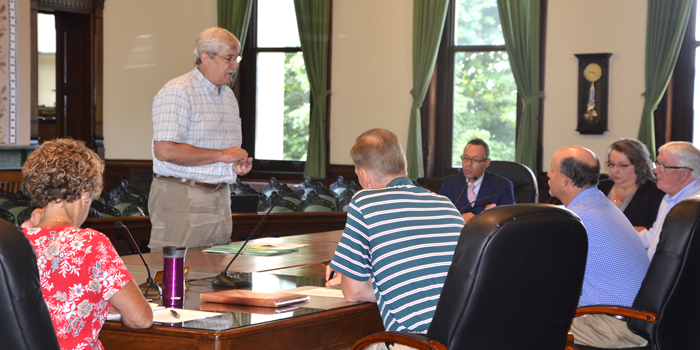 The city is seeking to take ownership of the Arnolt property near Argonne Road, with potential plans to have the building demolished. The building has been in receivership for years as a way to keep current with property taxes, but the receivership is about to expire.

The only interest the county has at this point is the property taxes, said Miner, who told commissioners that the city is requesting that the 2019 taxes be released by the county.

“In looking at past property taxes, it looks like they were in the range of somewhere between $250 and $400 a year,” Miner said.

The commissioners agreed to release the 2019 taxes and signed off on the city’s plan to acquire the land.

On Friday, the city board of works took a step toward acquiring the property..

Bob Weaver, administrator of the Kosciusko County Health Department, requested permission to apply for three grants: a Public Health Emergency Preparedness request in the amount of $15,454; a local health maintenance request for $48,859; and an Indiana local health department trust account request for $34,816. Commissioners gave approval for Weaver for all three grants.

Area Plan Director Dan Richard presented two rezoning requests, both recommended by the APC. Carl and Tammy Kendrick were given approval to rezone an 8-acre tract of property on the south side of Union Street, west of SR 15. The property was previously an Agricultural District and is now zoned as an Agriculture II District.

Debra Pilcher’s request to rezone a property on the south side of CR 400N, east of EMS B1 Lane, Leesburg, was approved. The property, formerly the site of the Barbee Christian Camp, was rezoned from a Public Use District to an Agricultural District.