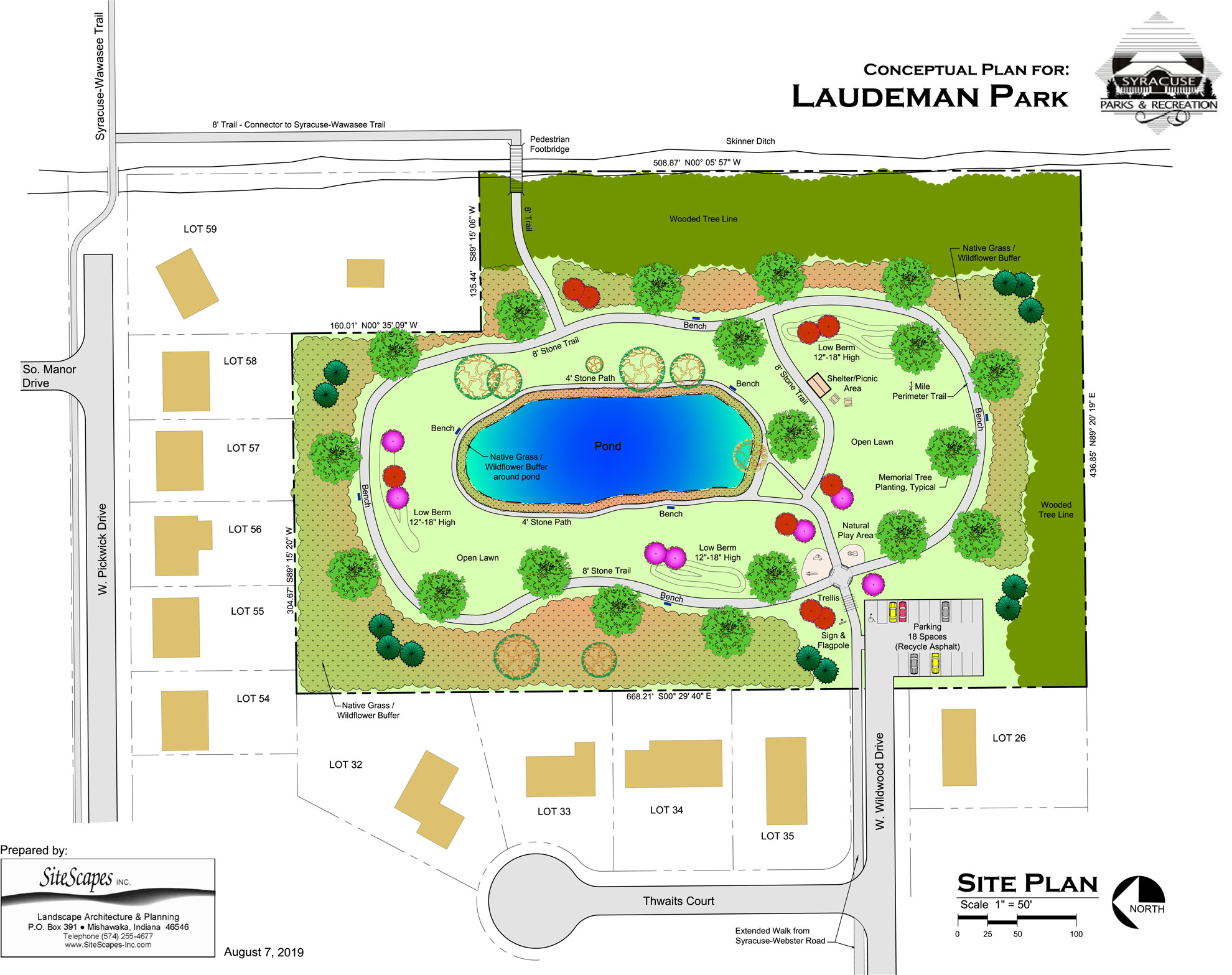 Pictured is SiteScapes Inc.’s conceptual plan for Laudeman Park. Syracuse Parks and Recreation Board voted to accept it as the concept it will pursue. (Photo provided)

SYRACUSE — Patrick S. Brown with SiteScapes Inc. presented the conceptual plan for Laudeman Park to the Syracuse Parks and Recreation Board Monday, Aug. 12.

The plan features two stone walking trails, including one along the edge of the pond, benches, a natural play area, a small parking lot, a picnic area and a buffer of native grass and wildflowers.

“It’s designed to be used as a guide,” Brown said of the conceptual plan, “to help you over the next few years … to develop it. And I’d just like to commend the park board. I’ve been doing (park design) for 41 years now, to have a park board take their time and do their due diligence — I mean, when we did the original, I came here in February or March, and we said we’d target four months. It’s like no, no, we’re taking our time.”

In particular, he praised the board’s efforts to slow down and talk with the new park’s neighbors as well as the public.

“It may not be the plan that everyone agrees with,” Brown said, “but it’s a plan that by consensus we all agree to, so it’s like ‘yes, I can live with that.’ By consensus the whole board came together and developed this plan, and we did have some neighbors show up, which was good.”

Brown also noted the plan could be implemented a step at a time. The board voted to accept the conceptual plan.

Fall and winter maintenance projects were also discussed at the board meeting. One included blocking off the skate park drive, which has developed deep ruts in it, this fall. A curb and lighting project is also planned at the Syracuse Community Center, with park Superintendent Chad Jonsson noting the parking lot needs to be sealed eventually as weeds are starting to poke through in places.

Carpeting, in parts of the community center, is also on the list for replacement. “Some of it is original carpeting from 2001,” Jonsson said.

Recreation intern Dylan Schaefer recapped his efforts with the Syracuse Parks and Recreation Department, including the launch of an Instagram account. The last day of his internship is Wednesday, Aug. 14.

• Trees around town with pink X’s on them will be removed by a contractor. This winter, once the ground is harder, some trees at Laudeman Park will also be removed, clearing space along the pond.

• The community center utilization for July was 3,769 people.