SYRACUSE — Limnologists study fresh water lakes and what takes place in the lake, explained Dr. Jerry Sweeten. His work is studying streams. He saw the opportunity to do a study on inlets into Lake Wawasee as a great “experimental design.” 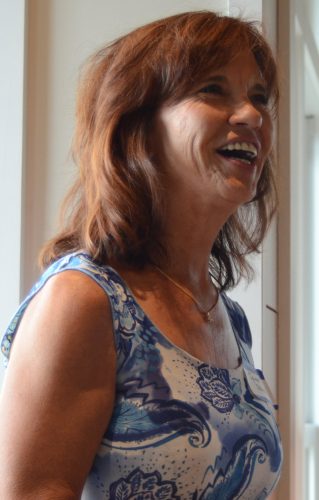 Joan Szynal one of the hosts for the social event.

Additionally Wawasee is setting a new standard as no study like this has been known to take place in a glacial lake, according to Sweeten.

Sweeten spoke with a group of approximately 50 friends and neighbors of a few Wawasee Area Conservancy Foundation board members Saturday evening in a social event at the home of Robert Smith and Dr. Joan Szynal. The premise behind the event was to provide information about the project and seek financial support for the three year study, which carries a price tag of $531,000.

WACF has hired Sweeten’s company, Ecosystems Connections Institute, LLC., Denver, to do a Wawasee Inlets Nutrient Study. Sweeten spoke that evening on how the project works, presented data and emphasized the importance of the data collection.

“Here in Indiana are some of the most southern glacial lakes in the world all on a trajectory of eutrophication – to growing algae – some faster than others. Every body of water is different. There’s no two that are the same,” he stated. After being contacted by Szynal, Beth Morris and Heather Harwood about the study, Sweeten felt Lake Wawasee was the place to “transfer our technology that we’ve been using in streams for a lake. “What a great experimental design is to understand the loads of phosphorous, sediment and nitrogen coming into a lake like Wawasee and take that data and begin a conversation with stakeholders in the watershed.” 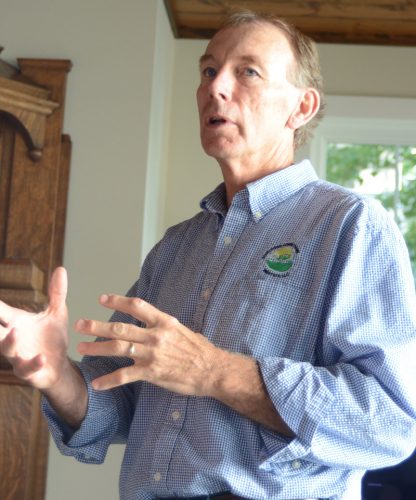 Sweeten spoke about the study he and students at Manchester University started on the Eel River, noting that river was designated in the top 41 priority in the Mississippi Watershed basin for exporting nitrogen, phosphorus and sediment into the gulf of Mexico. He said there is a 9,000 square mile hypoxic zone that is devoid of life. “The same process that drives that is also driving glacial lakes eutrophic condition … it doesn’t take a lot of phosphorous to tip that out. If you don’t understand what’s coming in you can’t understand what’s taking place …”

He explained the workings of the six gauges set around the five inlets to Lake Wawasee and the one outlet. He noted the gauges are computerized and programmed to take water samples ever 4 hours.

He said the importance of getting samples every four hours. “If you go out to take and grab a sample today, go back tomorrow or two weeks, a lot of things can happen in terms of water quality.” This was demonstrated by showing samples taken over a period of time and the changes over that time, which would be missed if sampled less frequently. “It helps us understand what’s coming into the lake.”

A number of questions were asked by some of those in attendance including whether his methodology was peer-reviewed. Sweeten provided a simple yes, noting he keeps in touch with Gene Likens who has used the same technology at Hubbard Brook, N.H., for 50 years. 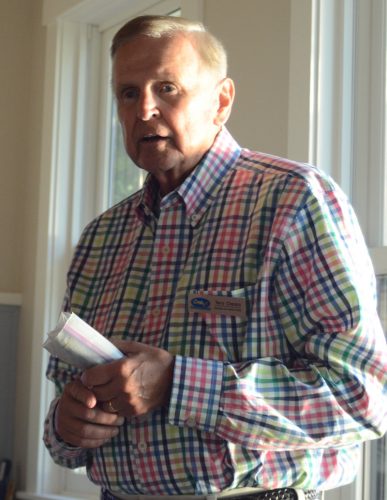 Terry Clapacs presents information on the need for financial support for the study.

Sweeten also went over the future of the project, noting there will be continued weekly water selections and a biological survey. “Water quality is more than chemistry. It includes biology … biology reflects what’s going on there … fish and bugs tell us about the overall health of the system in addition to looking at nitrogen and phosphorous.”

It was noted that the data collected, if not put into practice, is like putting an expensive book on a shelf and never reading it. The data already collected can be used to start conversations and plan for the next phase of remediation and restoration.

Sweeten stated that every year of a study is one data point and no two years are the same. “The work we do is looking for patterns and trends, that’s what is missing with the lake data (already present). “It looked like an ion shot from the sun. It was all over the place. There was no real pattern emerging. You can never have too much data …”

Guests were left with the thought that like other places such as St. Mary’ and a portion of Lake Erie, eutrophication could happen at Wawasee. “I don’t have enough data to suggest it will happen here,” Sweeten stated but some of the phosphorous levels already detected have him concerned. “Eutrophication can occur quickly … no two body is the same, but there is still the physical laws of nature… you put nutrients and sediment into the water and when it stops flowing you get eutrophication, drastic effects. I”m not saying this is emanate for Lake Wawasee by any stretch. You’re being proactive and getting a jump start so it doesn’t happen.”

The event was concluded with Terry Clapacs explaining the three-year study carries a $177,000 per year price tag and $531,000 is the target funding amount. He announced two grants have been received, one from the Natural Resource Foundation and Kosciusko County Community Foundation, totaling $160,000, leaving $371,000 to be raised before the study wraps up.

He encouraged people to consider pledging money toward the study and spreading it out over a three-year period. “No one else is doing it (the study). We are all interested in water quality to protect our lake.” 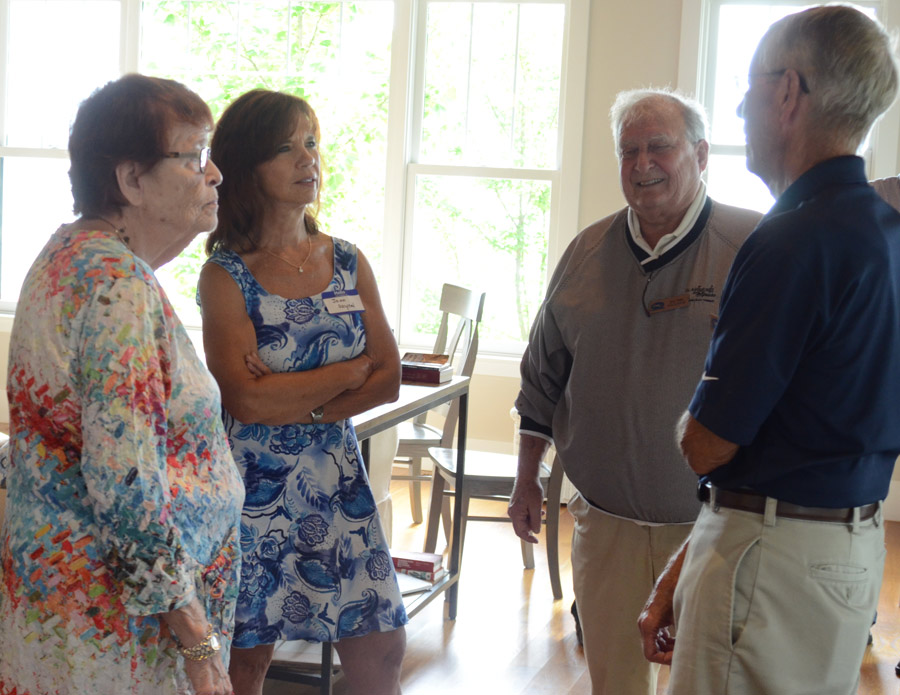 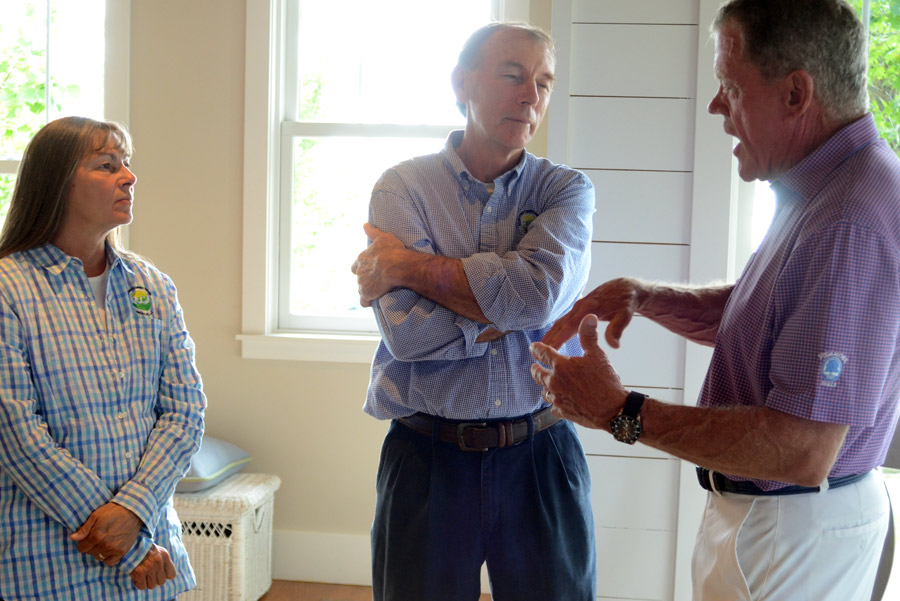 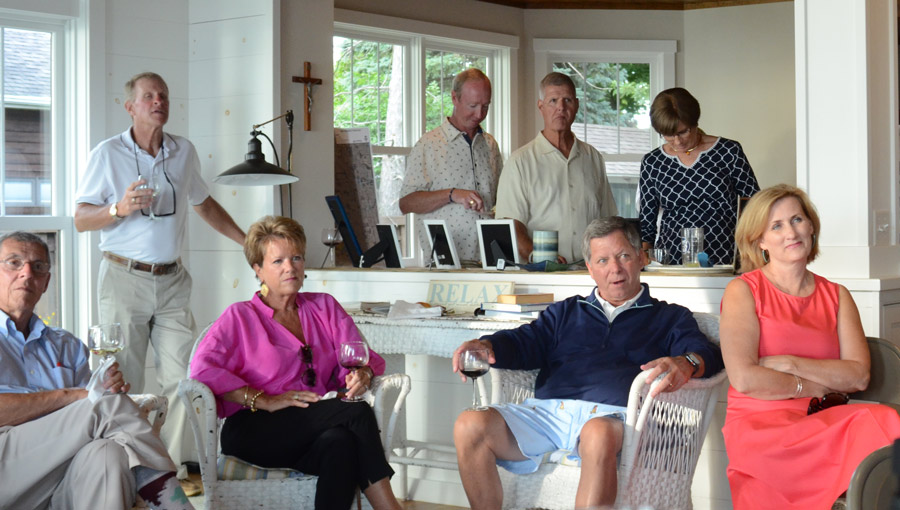 Just a few of the guest present at a social event to hear a presentation by Dr. Jerry Sweeten on the W.I.N.S. research on Lake Wawasee.