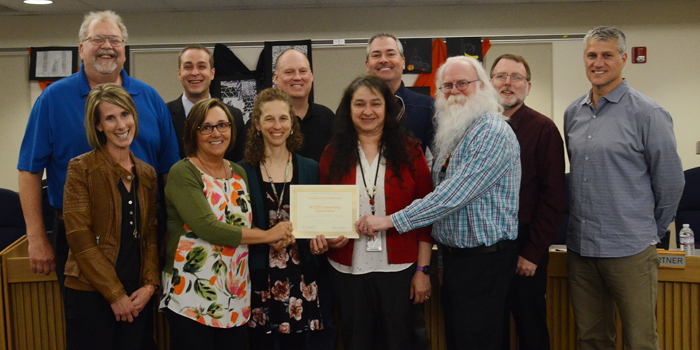 WARSAW — Warsaw Community Schools welcomed two new top administrators to its elementary school ranks, praised the efforts of its high school counselors and joined some WCS youngsters in celebrating history at the regular monthly meeting of the corporation’s board of trustees meeting Monday night, May 20.

The highlights of Monday’s meeting came in the school spotlight and during the monthly personnel report. 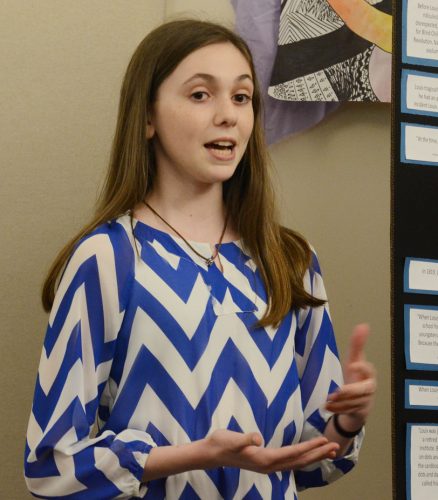 WCS student historian Raquel Brouwer talks to the school board about her presentation on Braille.

The board approved the hiring of Todd Braddock as assistant principal of Lakeview Middle School and Steven Boyer as the new principal of Eisenhower Elementary School to replace retiring Chris Gensinger.

Braddock previously served in an interim role of that position. Boyer came from the Plymouth school system and appeared at the meeting with his wife and three children as well as his college roommate and his parents.

During the school spotlight, Superintendent Dr. David Hoffert told the board that students from throughout the district are participating at the national level in an annual history competition.

“This has been a continually growing project and program over the recent years,” Hoffert said. “It is a wonderful program.”

Amanda Scroggs introduced a group of girls from that school whose projects advanced to national competition in the annual National History Day event scheduled for next month. Also presenting during the meeting were a group of middle school and elementary school-aged boys with their presentation related to the 1960s Civil Rights movement. Prior to the performance, team member Jason Benyousky said pre-performance jitters help with the polishing of skills.

“You get energy from being nervous, and you get adrenaline almost like you’re doing a race,” said Benyousky. “But for us, it’s almost something that helps you do better. So, doing these is really good because it sets an example for what we can do later on.”

The board also applauded Warsaw Community High School’s guidance department, which received a designation for excellence that includes an acronym inside an acronym. The American School Counselor Association makes up the “A” in RAMP, which stands for Recognized ASCA Model Program. According to Hoffert, the RAMP designation is a national recognition. Representing the department were Rhonda Graney, Sarah Graham, Luisa Davis and Scott Seney.