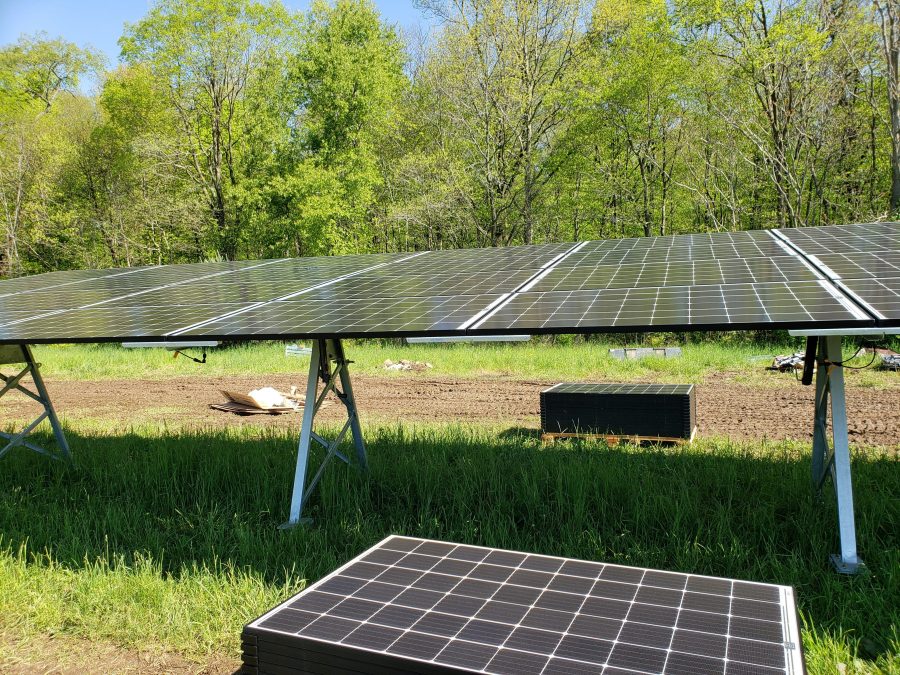 Shown are a few of the solar panels being installed in a field by the transportation department building of the Wawasee Community School Corporation.

SYRACUSE — Because state funding is either flat or declining for many school districts in Indiana, saving money becomes even more of a priority.

State funding for the Wawasee Community School Corporation has seen little or no growth in recent years. With a tighter budget, administrators have looked for ways to control or cut costs.

Earlier this year the school board approved a major project involving the installation of solar panels to be used to capture the energy of the sun. Work has started on installing two sets of panels by the transportation department building, one of which will power the transportation building and the other the high school. Panels will also be installed at Milford School, North Webster Elementary, Syracuse Elementary and Wawasee Middle School.

In a somewhat complicated arrangement, the school corporation entered a 20-year agreement with CollectiveSun to finance the project. After six years, Wawasee will opt out of the agreement and take full ownership of the solar panels. Until that time, the panels will be maintained by Ag Technologies.

James Flecker, director of personnel and legal services for the school corporation, said $5 million in bonds was taken out, typical for school construction projects, and that money will eventually be paid to CollectiveSun. The reasoning for this type of agreement, known as tax equity financing, is because a school corporation is not eligible for the 30% solar tax credit offered by the federal government, but a private investor would be.

The number of solar panels to be installed will vary at each building depending on the normal amount of power used at the building and also by the policy of the utility company. NIPSCO presently provides power for Milford School, North Webster Elementary and Wawasee Middle School, while KREMC provides power for the transportation building, Wawasee High School and Syracuse Elementary.

Jim Straeter, owner of the Rochester-based Ag Technologies, said NIPSCO has a net meter allowing for all solar energy captured to go to the grid. “The utility records it as a credit and the school gets it back one-to-one in kilowatt hours,” he said.

KREMC does not offer the net meter and only allows up to 50 percent of solar energy collected. “We will use it as we make it,” at the KREMC buildings, he said.

Straeter described the solar system being utilized as patented and hopefully good for 40 years. Known as the Solar Cam system, it will be manually reset four times each year depending on the angle to the sun.

At least 90 percent efficiency of the system is guaranteed “and if not, we will reimburse CollectiveSun the difference,” he said.

He emphasized the technology for solar panels has improved especially within the last seven years and said panels seven years ago generated 235 watts but now can generate 325 watts. And the amount of light rays captured from the sun has increased from 14 percent per panel to 19 percent.

How panels are doing as a group can be monitored online so adjustments can be made if a group is showing a lower performance, Straeter said.

Dr. Tom Edington, WCSC superintendent, said utility costs come out of the operating fund in the budget, so once the solar panels are in operation an immediate savings should be seen. This will free up money to be used elsewhere, such as, for examples, to hire teachers or for teacher salaries.

A total of 10,456 solar panels will be installed once the project is completed, anticipated to occur by Labor Day weekend.