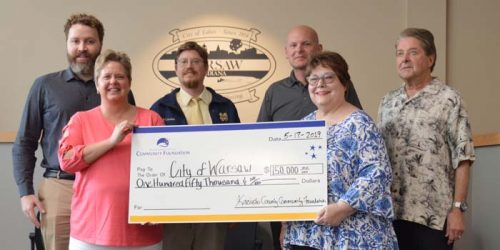 Representatives of the Kosciusko County Community Foundation on Friday said the cost of the plaza sculpture will be covered with a $150,000 grant from the Castaldi Family Memorial Fund at the recommendation of the Warsaw Public Arts Commission.

The board of works on Friday accepted the grant proposal and then signed a contract with the artist, Osman Akin, to provide the artwork for the public park.

The plaza is scheduled to be constructed later this year and the sculpture by Akin, of New York City, is tentatively set to be installed by the end of October, according to Suzie Light, CEO of the community foundation.

The Castaldi Family Memorial Fund was created by the Castaldi family as a tribute to their parents, Lawrence and Ruth Castaldi who moved to Warsaw in 1954 when Lawrence opened up a Mentone plant for Midwest Spring Manufacturing Co.

The couple was very active in the Warsaw community. Lawrence was among the local leaders who helped establish Kosciusko Community Hospital, where Ruth volunteered for 30 years.

Light, who has seen renderings of the proposed sculpture, said she believes it will stand about 12 feet tall and will pay homage to the city’s legacy of lakes, environment and orthopedics.

The sculpture will be located near the plaza fountain, which will take on the Castaldi name.

“We are thrilled to help the Castaldi family honor the legacy of their parents through public art located near the handicapped accessible water feature in the city the Castaldi’s loved and in which they invested so much of their lives,” Light said.

The growing emphasis on public art began several years ago when Mayor Joe Thallemer sought to establish public art commissions, which has since developed a plan to create a virtual art trail.

The first permanent artwork honored the legend of Milt Holmgrain and sits in Central Park.

In addition to the upcoming plaza project, the arts commission has lined up plans for a sculpture to be installed in the city parking lot later this summer, Light said.

The board also approved a request for a street closure of Center Street between Buffalo and Lake streets to accommodate a diversity festival planned for Sept. 14 by the newly organized non-profit group, OneWarsaw – Celebrating Us.

Organizer Travis McConnell said the festival will include food trucks, performers and musicians.

The event will be family-friendly and promote inclusion.

The festival will be during early evening hours. The street closure will be an extension of the closure used weekly for the farmer’s market earlier in the day.

In other items, the board opened the lone bid received for the traffic signal modernization project for the intersection of the Center and Buffalo streets. The bid from Michiana Contracting, Plymouth, was for $358,684.50 and was taken under advisement. The work includes new poles, wiring and control units.

The board also approved two change orders for sewer improvement work. One was for $389,7118 in increased cost after workers discovered work that needed to be done before more rehab work could be performed. The work involved eight spot repairs. The other change order was for $27,930 and involved similar circumstances. Both projects are with Layne Inliner.

The sewer improvement work is part of a $10 million project to improve aging underground sewer pipes.