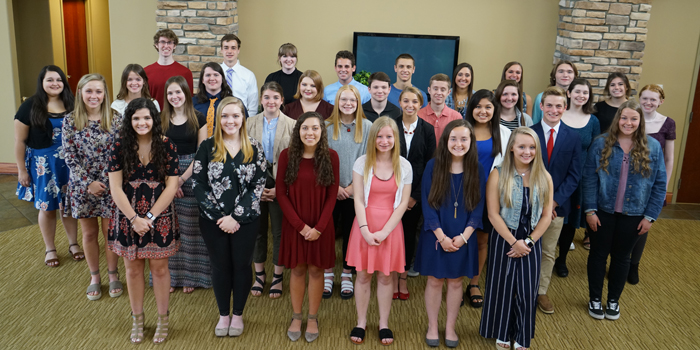 WARSAW — Humility and teamwork were the main topics of the Kosciusko Youth Leadership Academy banquet and graduation held Wednesday evening, May 1.

Thirty-two high school students from five area schools graduated from the program. During their time in KYLA, students interacted with several guest speakers and focused on giving back through Project Proud, a community service project.

In total, 15 community service projects were completed by KYLA members and ranged from fundraising to help people escape human trafficking, to creating a clothes closet for elementary school students in need. 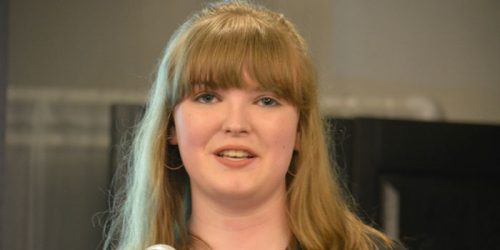 “Creativity and Recovery” focuses on helping adults and children who are currently residing at The Beaman Home in Warsaw recover from emotional trauma through art sessions. Williamson hosted two art sessions at the domestic violence shelter and partnered with Erica Deuel, owner of Spoonful of Imagination Art Studio, for one of the art sessions. Deuel taught a project and brought supplies for participants to use during the session.

During her presentation, Williamson discussed an interaction she had with a woman staying at the shelter. The woman chose to watch an art session take place rather than participate.

“She came up to me afterwards and she said, ‘I came in here in a bad mood,'” said Williamson. “‘I didn’t think I would like this at all. But I’m leaving here so happy. Thank you for that.’ She didn’t even participate and she felt so much better. And that made me so happy because I really wanted to help make people feel better.” 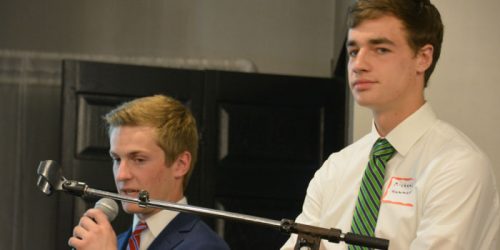 Pictured, from left, are Zach Leedy and Michael Hammer.

In March, Leedy and Hammer organized a supply drive for Fellowship Missions, a homeless shelter in Warsaw. The drive was held at Martin’s and Owens Supermarkets. To spread awareness for the drive, the pair created fliers and contacted local media outlets to advertise the event. In total, $1,525 in monetary donations were raised and several thousand dollars in groceries and other goods were donated.

“We were glad that we could give them the supplies and money and were blown away by how much we ended up getting,” said Leedy.

“We really live in a great community and it was great to see all the people who came out to help,” said Hammer. 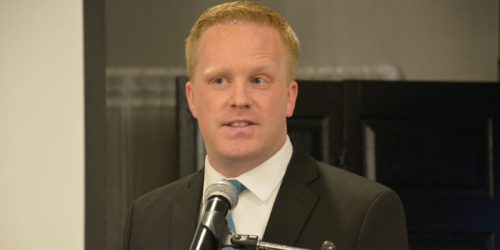 Keynote speaker Matt Rudkin discussed the importance of humility at the KYLA banquet.

Keynote speaker Matt Rudkin, chief meteorologist for WSBT-TV in South Bend and a Warsaw Community High School graduate, delivered a humorous and motivational speech about leadership, humility and teamwork. He reflected on his father and a hotel manager he used to work for as his role models.

“James [the hotel manager] ran the place, but when it was really busy, he would always help the housekeepers, folding towels or scrubbing down a bathroom,” said Rudkin. “And it made a world of a difference. And my father used to be the store manager for the old Marsh location in town. He used to greet people at the door and as a kid, I never understood why he did that when he was the manager. Now that I’m older, I really get it because you want to work for somebody who would do the smallest of jobs, no matter your background or education.”

Tony Ciriello also announced his retirement from his position as KYLA moderator.

“After 25 years, it’s time for somebody else to take the helm,” said Ciriello. “I can walk away knowing that I did my job. It’s been a pleasure to be a part of it.” 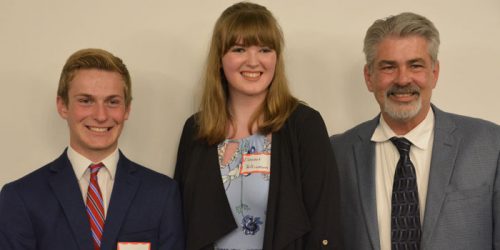