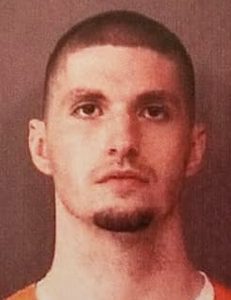 KOSCIUSKO — A Cromwell man was arrested for spitting blood on a law enforcement officer while serving time in jail.

James Paul Grothaus, 25, 127 S. Jefferson St., Cromwell, is being charged with battery by bodily waste, a level 6 felony; and resisting law enforcement, a class A misdemeanor.

According to the affidavit of probable cause, several inmates tested positive for alcohol in their systems and were told to gather their belongings to move to the disciplinary block of the jail. A male inmate, identified as Grothaus, refused to obey commands and began throwing items.

After receiving no cooperation, officers attempted to gain control of Grothaus and he resisted officers. This resulted in Grothaus being tased. Officers were able to then control Grothaus and placed him in a jail restraint chair. During the struggle, Grothaus’ nose began to bleed. Grothaus spit his blood onto an officer’s face and continued to spit blood onto the floor.

Grothaus was booked in the Kosciusko County Jail on April 23, with a $5,250 surety and cash bond.