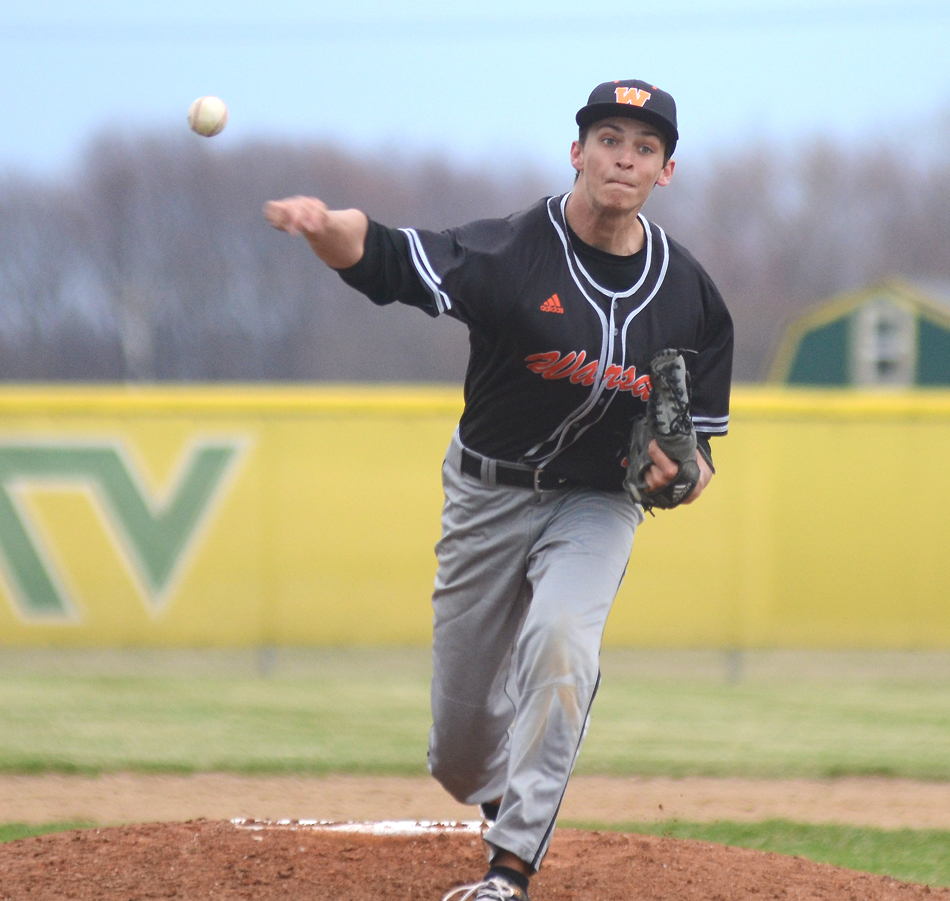 Drake Graham works against Tippecanoe Valley during a game in Akron Wednesday. (Photos by James Costello)

AKRON — Even with the bases loaded and the tying run at the plate, Warsaw coach Andy Manes kept the faith in his starter Wednesday.

Manes gave Drake Graham the chance to finish off the complete-game shutout, and, even though things got a little hairy for a moment, that’s exactly what Graham did, fanning his third batter of the inning to close out a 4-0 Warsaw win at Tippecanoe Valley.

“That’s a good performance, for sure,” said Manes of Graham. “Yeah, we had some interesting things happen that last inning. We told him he kind of did it to himself — hit by a pitch, walk, walk — but he buckled down when he had to, got the last out.”

Graham, a 6’5” senior for the Tigers, surrendered just one hit while striking out 13 in Akron. He only allowed a total of three Valley base runners leading into the final frame before he began to tire in the cold and wet conditions with his pitch count steadily climbing. After striking out Tucker Shull and Ethan Yates, he hit Payton Mills with a pitch, then gave up back-to-back walks to Tanner Trippiedi and Braxton Davis to load the bags, but he battled back from a 3-1 start against Owen Kirchenstein with the top of the order on deck for his final strikeout and the shutout victory.

“We weren’t getting the bats going. What did we have — one hit?” said Valley head coach Greg Prater. “Yeah, we just have to hit the ball better. We weren’t catching up to his fastball. Tip our hats to Graham, he did an excellent job going all seven innings. He got a little loose in the seventh, but he still came back and took control of that last hitter for the third out. Hat’s off to him.”

It wasn’t exactly a hit parade for the Tigers, either, as they finished with just five hits Wednesday, but they strung enough together during a big fourth to get their first win of the season. 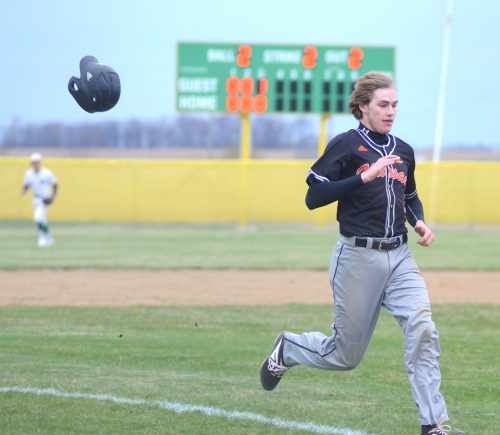 Liam Patton scores a run for Warsaw during the Vikings’ big fourth inning.

Already leading by a tentative one-run margin after Graham reached second on an infield error in the third, Josh Ehrlinger moved him over to third, and Noah Burgh singled him home, Warsaw tacked on three more runs in the fourth. Liam Patton led off the inning with a double, Jacob Hutcherson drew a walk, and Graham drove Patton home with a two-out, two-strike looper into right. Joey Springer coaxed another walk from Vikings starter Lucas Walters to load the bases, and a passed ball at the plate scored Hutcherson and advanced Graham to third. Ehrlinger ripped a ball into deep left to score Graham, and the Tigers had all the runs they would ever need.

“We wanted to put some pressure on them, steal some bases, get guys in motion,” explained Manes. “Typically when you get guys on base and you have confidence running bases and guys out there that can hit the ball, good things are going to happen. We thought we could have probably gotten a couple more that inning, too, but we kind of left some runners on base.”

“The one inning, that’s what I talked to the guys about. It happened to us last year. We’re trying to prevent that one bad inning per game, and that’s costing us the ‘W’ at times,” said Prater. “All we can do is keep working hard. They are working hard — we’re working very hard — so we’ll get back to work tomorrow night. We’ve got Bremen on Saturday morning. Looking forward to that and just stay with it.”

Walters took the loss giving up five hits with four walks for four runs in 4 1/3 innings pitched. He gave way to Braxton Davis in the fifth, and Davis closed out the frame before Prater moved Kirchenstein over from third in the sixth. Kirchenstein shut the door on the Tigers from there, but the damage was already done.

“We brought Braxton Davis in to give us that one inning, got us out of that one. He was in the bullpen warming so I just wanted to get those two outs with him. The plan was Owen was our next guy on the hill; I just didn’t want to throw him out there coming off of third base,” Prater explained.

“He threw very well for us for a freshman. He can throw the baseball across the plate. Looking forward to having him in the future, and he’s going to be throwing more for us.”

Wes Melanson recorded Valley’s only hit against Graham, an opposite-field shot in the first. Patton finished 2-for-3 with a run scored and a stolen base to lead Warsaw at the plate.

Valley slips to an even 2-2 and will travel to Bremen Saturday.

Warsaw moves to 1-2 with its first win and plays host to Huntington North Thursday, then follows up with another home contest versus Columbia City Friday.

“The first two games we played pretty good competition. St. Joe is a really good team. Indian Creek is a really good team. I felt honestly tonight that maybe we didn’t come out with as intense a level as we did two weeks ago. Credit to them, Valley came out and battled hard, but, yeah, we’ve got to just button some things up before tomorrow and Friday,” said Manes.