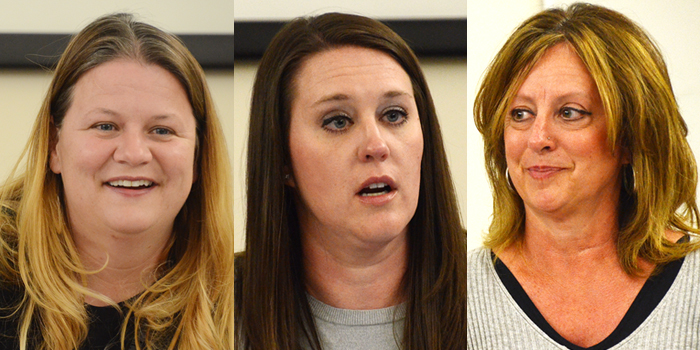 WARSAW — The Warsaw Community Schools’ Board of Trustees heard from one of its own Tuesday afternoon, April 9, during its monthly work session and learned how this Warsaw alum endeavors each day to keep students in the classroom.

During a portion of the meeting known as Getting To Know The Warsaw Tiger Team, the board was introduced to Daisey Hollon, a 1995 Warsaw Community High School graduate who currently serves as the district’s attendance officer.

“I try to make sure everyone’s in school,” Hollon told the board, adding that for students who are absent she strives to get them to class, even if she has “to drive them or assist them or make a plan with their family on how to get them here.”

Hollon has been with the school corporation for five years and is a licensed clinical social worker. She previously worked for The Bowen Center and Wawasee School Corporation. After graduating high school, Hollon played softball at Indiana Wesleyan University.

Hollon’s efforts were lauded by WCS Superintendent Dr. David Hoffert, who told the board that in her capacity, she works frequently with troubled families in an effort to ensure a quality education for the children of those families.

“Daisey can tell you the names of a lot of families in this community that would otherwise slip through the cracks,” Hoffert said.

“The key to these (assessments) is that they are teacher-driven,” said Wilfong of the interim elementary assessments. “They are able to take that information and turn it around very quickly to modify instruction. Each interim in each grade is significantly different depending on what grade they’re in, starting in kindergarten.”

Robertson said the school corporation is proposing adoption of some new texts in several study areas for 2020. “So some even better news when we take a look at textbook rentals,” said Robertson, who announced that for most of the proposed books for 2020, there would be a “significant drop” in price.