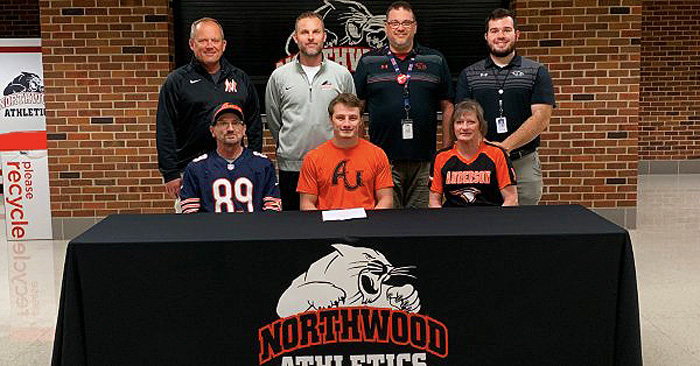 NAPPANEE – NorthWood senior Nic Bontrager will continue to ballhawk after signing his National Letter of Intent to continue his football and academic career at Anderson University.

Bontrager was an integral part of NorthWood’s success this past season, leading a Panther defense that held five opponents to a score or less. Bontrager made 36 solo and 85 total tackles as a linebacker and had eight tackles for loss as well as 1.5 sacks and an interception.

Bontrager, the son of Deb Morris and Aaron Bontrager, earned NorthWood Scholar Athlete honors each of his four years as a student/athlete. As a senior, he was also named the Rod Bradway Special Teams Player of the Year and helped coach Nate Andrews and NorthWood to an undefeated regular season, No. 1 state ranking heading into the playoffs, and a Northern Lakes Conference championship.

Anderson University, coached by Steve Rock, were 2-8 overall and 2-6 in the Heartland Collegiate Athletic Conference.