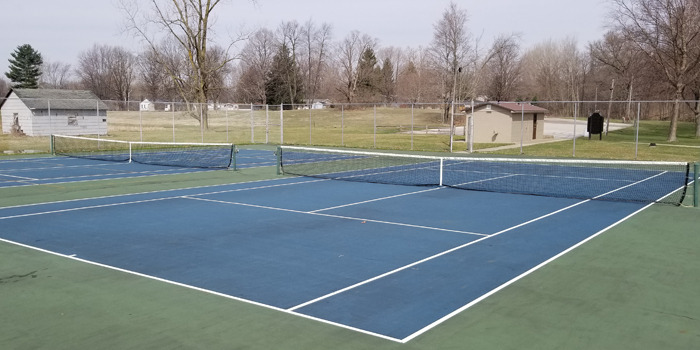 The tennis courts at Kelly Park in Warsaw will be revamped to make room for four permanent pickleball courts this summer. One tennis court will remain for use.

WARSAW — Two grants have been secured to pay for the future permanent pickleball courts at Kelly Park on the city’s south side.

The cost of transforming the tennis courts into four pickleball courts will be covered with grant money from the K21 Foundation and the Dr. Dane and Mary Louise Miller Foundation.

Approval of the grants, each for about $31,000, were approved by the city Board of Works and Safety Monday morning, April 8, and set the stage for the transformation in the next few months.

City officials celebrated the fact the changes will be made with community funding and not tax dollars.

“This is incredible that we live in a community where foundations get behind parks and recreation and have this opportunity,” said Parks Superintendent Larry Plummer. “It’s my understanding that this will be the first permanent pickleball courts in Kosciusko County that are outside and can be used for free. It’s exciting.”

Pickleball has grown in popularity in recent years. It is somewhat like tennis, but uses paddles and does not require as much physical space.

The foundation for a new playground is being prepared this week. Older equipment seen in the background will be removed.

Plummer credits Dave Weidenbenner, a leader among a group known as the Pickleball Fanatics, for asking the park board to consider establishing a permanent court somewhere in the city.

“It just kind of snowballed from there,” Plummer said.

Work on the courts will include a new “overlay,” new posts, nets and fencing that will divide the courts from one remaining tennis court, Plummer said.

Plummer said the park is in the middle of a transformative year with other changes emerging this summer. Those include:

Within a few years, after the performance node is constructed, the summer concert series at Central Park will rotate between Central Park, Kelly Park and Lucerne Park, where an existing amphitheater is being revamped this year, Plummer said.

Further development of Kelly Park is part of the park board’s master plan.

“We would like to continue to go toward the conceptual plan and make that a nice place for the south part of town,” Plummer said.

“It will look great once it’s all done.”