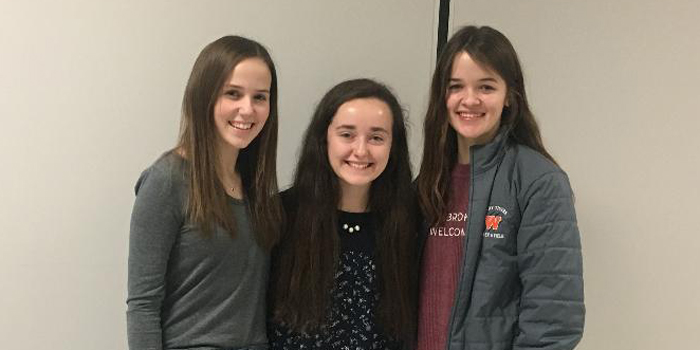 Olivia Renier, Annie Wottring and Ellie Klotz are members of the Kosciusko Youth Leadership Academy where students are asked to create and complete a community service project, alone or in groups. The only specific requirement is that students must dedicate a minimum of 10 hours to their chosen project.

Destiny Rescue is an internationally-recognized, Christian, non-profit organization that helps rescue children trapped in the sex trade. They currently operate various programs in Thailand, Cambodia, the Dominican Republic, the Philippines and India. They also have offices in the United States, Australia and New Zealand.

“Olivia is the one who approached Ellie and me with the idea of doing Destiny Rescue for our project and we were instantly on board with it,” said Wottring. “We are excited for the opportunity to help change the lives of children.”

“I thought Destiny Rescue was an amazing organization for our group to partner with because we all had a passion to help children,” said Renier. “When we talked as a group for what we wanted to do, we all knew we wanted to fundraise money for an organization that helped kids.“

The girls are raising money through donations as well as selling bracelets. The bracelets are made by young women who have been rescued from sex trafficking, providing a source of income for them.

According to Wottring, the original goal was to raise enough money to rescue three children, a total of $4,500. They have currently raised $1,856.

“We are still raising money as we still have a few bracelets left to sell and we have a retirement community doing Destiny Rescue as their mission project for the month of April,” said Wottring. “We would love to reach our goal, but if we don’t, we are overjoyed that we were able to raise more than enough money to rescue at least one child.”

Since 2011, Destiny Rescue has rescued over 2,000 enslaved children around the world and assisted in keeping hundreds more from entering the sex trade through various prevention programs.

“I really enjoy working with Destiny Rescue because they have a great cause and I love helping children in need,” said Klotz. “I also enjoy telling other people about the amazing things that Destiny Rescue does and spreading awareness.”

“Our hope would be to raise enough money to be able to rescue another child,” said Wottring. “This project has been a lot of fun for us all and we are beyond grateful for having the opportunity to participate in such a worthy cause.”

Renier, Wottring and Klotz will be collecting donations through the month of April. To donate to the project or to purchase a bracelet, contact Destiny Rescue at http://go.destinyrescue.org/kyla or email Wottring.