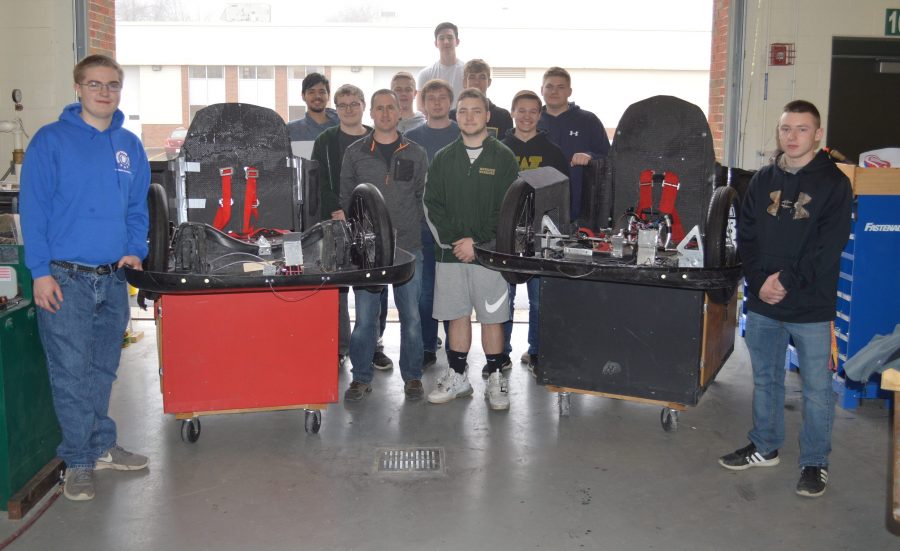 When this photo was taken, the bodies of both of the super mileage cars were in the process of being painted. The electric car is on the left, the diesel car on the right. Shown is most of the crew for the super mileage cars. In front, from left, are Nicholas Murphy, engineering teacher Allen Coblentz, Brandon Baker and Marshal Miller. In the middle row are Eric Martinez, Jack Collins, Stephen Foy, Luke Weisser, Evan Dippon, Bryce Knepp and Jackson Templin. In the back is Cameron Gillum. Not pictured are Logan Hollar, Zach Leedy and Micah Rassi.

SYRACUSE — A crew of a little more than a dozen Wawasee High School students, under the watchful eye of engineering teacher Allen Coblentz, is busy putting the finishing touches on two super mileage cars. Diesel and electric powered cars will be entered in the Shell Eco-marathon annual competition April 3-6 at the Sonoma Raceway in Sonoma, Calif.

Wawasee has entered cars in the Shell competition for several years, but each year there is always some variation in the cars entered, whether in size or how they are powered or built. For about the last three years, cars have been entered in the urban concept category.

Urban concept cars are made to look more like real cars, a smaller version of a smart car. “If you put a bumper on it, you could get it licensed and it could be driven on the roads,” Coblentz said.

The cars are not as small and low to the ground as previous super mileage cars were and they have more accessories such as brakes and brake lights, headlights and turn signals. “They have two side doors similar to a manufactured car door,” he said.

Both cars will be entered in the Drivers World Challenge, a race only urban concept cars can enter at Sonoma. It is a race to the finish with a shotgun start, but fuel must still be used wisely “or you will be left dead on the track,” Coblentz said.

A carrot dangling on the stick, so to speak, is the top three cars in the challenge get to compete in London for the ultimate world challenge in July. Shell pays for nearly all of the expenses involved too.

“It has sparked more teams to go urban,” he said.

Having the urban concept category creates more strategy “and makes it more of a true race.” Fuel efficiency is still important, but speed becomes more of a factor. “You are working against both time and fuel,” Coblentz noted.

Ultimately, the goal is to get either the electric or diesel car to qualify for the London race in July.

This year, the diesel car is not new, but has been modified somewhat and reduced in weight. Last year the car had 535 miles per gallon and the goal this year is 675. The electric car, powered by a 48-volt battery, is new this year and entering any new car in this competition is always somewhat risky because not everything can be anticipated.

But having a car used previously has helped because all cars are built using the same carbon fiber mold, Coblentz noted. Both cars essentially look the same, but have different power sources.

Getting 60 kilowatts per hour is the goal for the electric car.

On March 29, the cars will be loaded and shipped to California.