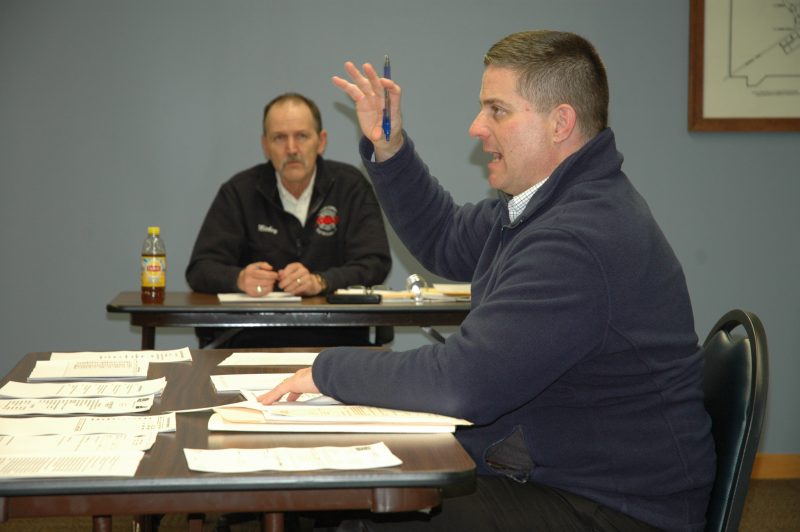 “This will complete the cycle of SCBA replacements we began three years ago,” said Fire Chief Mickey Scott. The new bottles carry enough oxygen to nearly double the time each bottle can service a firefighter.

Township Attorney Andrew Grossnickle reported he was still reviewing the construction contract for a baby box at Fire Station 2. He indicated there were issues that may need to be renegotiated with the provider. Costs for the baby box have been donated by a private citizen.

• The fire department responded to 13 fire calls and 95 EMS calls, saving an estimated $49,000 in property damages. The township suffered $35,000 in property loss in January from one structure fire and a patio fire.

• Cardiac monitors were received and distributed to the department, the North Webster Fire Department and Warsaw-Wayne Fire Territory, courtesy of a K21 Foundation grant.

• The department ordered a 2019 Dodge Ram to replace the department’s current vehicle. “We did work with the sales representative and we were successful in acquiring a $2,500 trade-in on our old truck, so the final price quote is $29,972,” said Scott. The department will spend another $8,000 or $9,000 to install lights, siren, emergency radio and graphics. The truck is expected to be delivered in 12 to 16 weeks.

• Renovations on the two fire stations are nearing completion. Scott said the target date for completion is April 15 and invited the board members to visit the fire stations to see the improvements.

During February the trustee’s office dispensed $475 in rent and $2,632.85 in utilities. Close reported her office disbursed a combined total of $1,073.60 in food vouchers for January and February.

Board member John Heckaman reported he spoke with several persons about the feasibility of installing a tornado siren at Enchanted Hills as requested by representatives of the home association.

Heckaman said the Wawasee Property Owners Association, which would also benefit from the siren, was not interested in contributing to the $25,000 cost.

Russ Carlson of the association said he would look further into the matter.

Grossnickle distributed a certification of compliance with nepotism and conflict of interest policies, which the board members individually signed. The annual acknowledgment is required by the state board of accounts.

The fire board will next meet at 6:45 p.m. Monday, April 8, in Syracuse Town Hall. The township advisory board will meet at 7 p.m.