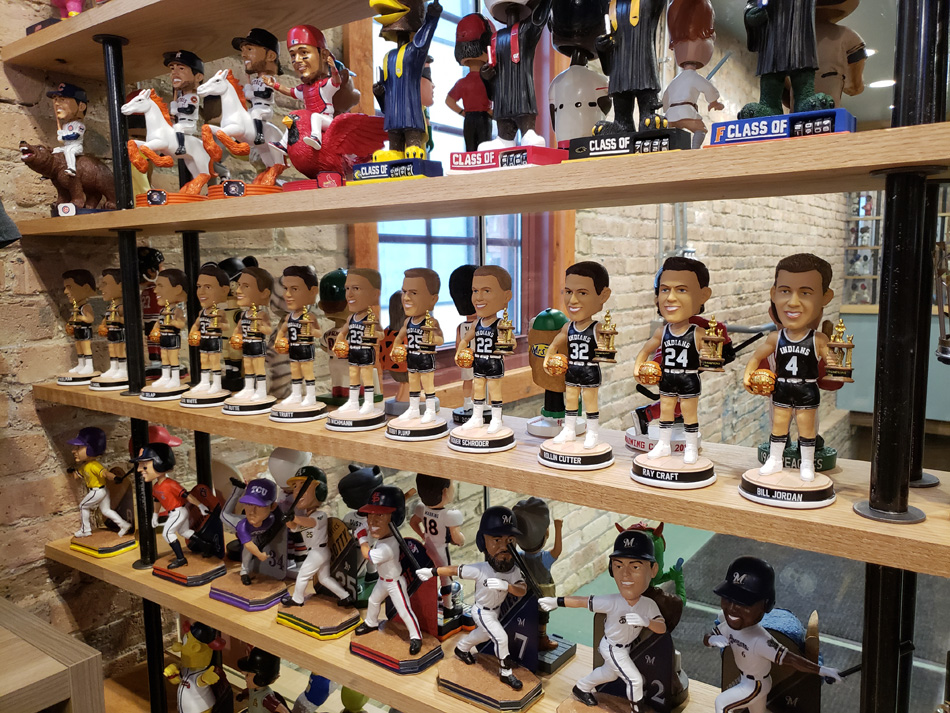 The 1954 Milan basketball team will have a bobblehead set released to commemorate its 65th anniversary of the ‘Milan Miracle’. (Photo provided by the National Bobblehead Hall of Fame and Museum)

MILWAUKEE, Wis. – Today, the National Bobblehead Hall of Fame and Museum and the Milan 54 Hoosiers Museum unveiled a limited edition series of bobbleheads commemorating Milan High School’s 1954 Boys Basketball State Championship. Milan High School’s unbelievable story was featured in the 1986 movie Hoosiers, which is widely considered to be one of the best sports movies ever made. The release comes just weeks before the 65th Anniversary of Milan’s historic victory, which was on March 20, 1954, and as Hoosier Hysteria kicks into high gear.

All 12 players from the 1954 Milan High School basketball team are included in the bobblehead series, which is available for purchase online in the National Bobblehead Hall of Fame and Museum’s Online Store or at the Milan 54 Museum. The bobbleheads are $25 each or $250 for the set of 12, and shipping is a flat rate of $8.

Milan High School, with an enrollment of only 161, defeated powerhouse Muncie Central High School, which had an enrollment of 1,662, by a score of 32-30 in the state championship game at Butler University’s Butler Fieldhouse (now Hinkle Fieldhouse). With the game tied at 30, the team’s leader, Bobby Plump, hit a 14-footer from the right side as time expired to win the championship and deny the Bearcats a fifth state title. Forty thousand people descended on Milan, which had a popular of only 1,150, the following day as the team returned home from Indianapolis, lining State Road 101 for 13 miles to congratulate the Indians. Milan is the smallest school to win a single-class state basketball title in Indiana, and finished the season with a 19-2 regular season record and 28–2 overall record.

Milan High School’ famous “Milan Miracle of 1954” was the inspiration for the 1986 film Hoosiers, starring Gene Hackman. Some details were changed in the movie, including the team’s name, which was “Hickory” on the big screen adaptation. The team’s star player, Bobby Plump, was named Jimmy Chitwood in the movie.

“These bobbleheads are the perfect way for to commemorate Milan High School’s state championship, one of the greatest sports stories in Indiana history,” said Phil Sklar, Co-Founder and CEO of the National Bobblehead Hall of Fame and Museum. “The bobbleheads are a symbol of a great underdog story and championship team. It is a must-have for all Indiana basketball fans.”

In early 2000, a committee was formed to explore the possibility of developing a museum in Milan to house the artifacts and memorabilia of the 1954 Milan Indians Team. In June 2013, the dream was realized as the Milan ’54 Hoosiers Museum opened its doors in the former State Bank of Milan building. The Milan 54 Hoosiers Museum is located at 201 W. Carr St. in Milan, Indiana and is open from 10am to 4pm Wednesday through Saturday and noon to 4pm on Sundays.