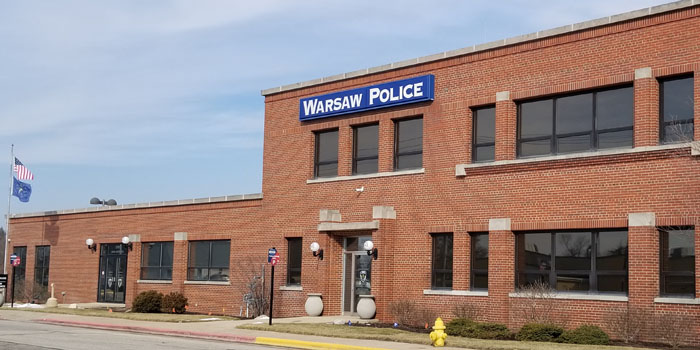 A view of the Warsaw Police Department headquarters.

The city of Warsaw announced Wednesday, March 6, that the Board of Works and Safety would meet at 8:15 a.m. Friday in a special session at City Hall for what is described as “the presentation of disciplinary action or proceedings against certain members of the City of Warsaw Police Department,” the news statement said.

The meeting comes nearly two weeks after two unnamed officers were placed on leave pending a review of their involvement in connection with a Jan. 25 incident when Police Chief Scott Whitaker investigated what he believed to be an impaired driver while he was off duty.

Whitaker followed the suspected impaired driver after watching the motorist nearly strike other cars on CR 200S and drive erratically. He followed the car to Chickadee Lane and accused a 74-year-old man of being behind the wheel. Further investigation determined the man’s wife had been driving, and that she struggles with nighttime driving.

The man claimed Whitaker tackled him after being confronted. Whitaker contends he tried to prevent him from getting back into his vehicle for fear he was impaired and that the man’s legs gave out.

Nobody was arrested and the couple did not file a complaint over how Whitaker handled the situation. Whitaker later apologized over the confusing circumstances.

Two officers who responded, though, have come under scrutiny over their actions concerning how Whitaker conducted himself. It is believed one of the officers told a city councilman about the incident. The councilman then interviewed the couple and then forwarded a recorded interview of the couple to Mayor Joe Thallemer.

The city had Indiana State Police review the incident. ISP recommended the incident did not merit consideration of criminal charges against Whitaker.