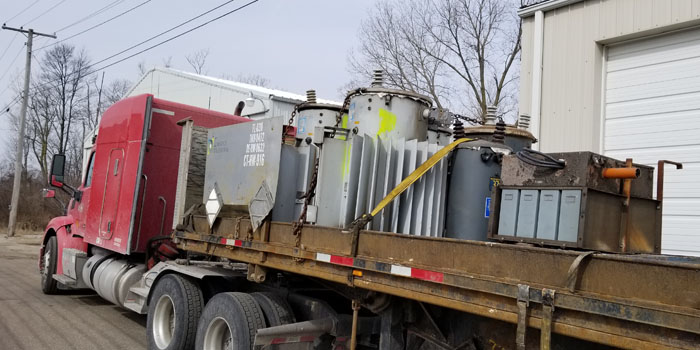 PCB capacitors and transformers from the former Arnolt property were trucked away from the site Friday at the direction of the U.S. EPA.

WARSAW — A representative of the U.S. Environmental Protection Agency had words of praise for emergency responders who put the brakes on a January oil spill in Warsaw.

Police responded on Jan. 22 to a report of people trespassing at a closed factory site off Argonne Road known formerly as the Arnolt property. What they found were “several” people draining oil from a transformer in an attempt to access copper.

The property is east of the Freedom Express gas station and along Durbin Street.

Warsaw-Wayne Township Fire Territory was immediately summoned and shut off the source of the oil. They were able to contain the spill with absorbents and blocked the floor drain, according to the city.

Representatives of the EPA and a contractor hired by the federal government returned Friday to remove PCB capacitors and transformers held oil with a “residual amount” of PCBs. PCBs are coolants and lubricants used in electrical equipment.

The initial quick reply by local authorities drew praise from the EPA. 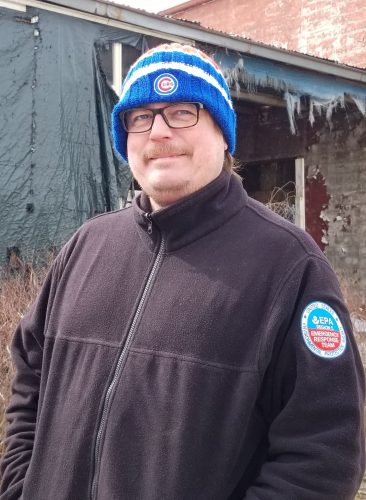 Andrew Maguire, a federal on-scene coordinator for the Region 5 Superfund Division of the Environmental Protection Agency, said he’s never seen such a quick initial response to a leak until the Jan. 22 incident in Warsaw.

“I don’t know if I’ve ever seen it happen that quickly where they actually caught them and stopped them in action before the oil got to the drain and that would have made it to the lake,” said Andrew Maguire, federal on-scene coordinator for the EPA’s Region 5 Superfund Division.

“It’s shocking they got there that quick,” Maguire said.

Immediately after the spill, the EPA pumped up oil that could be accessed from within the transformers and capacitors and removed absorbent materials and spilled materials.

The transformer that was being drained by the suspects contained mineral oil with a residual level of PCBs, which is not considered a hazardous substance. But there were other substances, including eight capacitors, that contained high levels of PCBs on site that were considered hazardous, Maguire said.

He described the work by the EPA as “an emergency response action to mitigate the potential release of hazardous substances on site.”

The reason they responded was the threat to Winona Lake, he said.

“The oil is still an oil and when you introduce it to water, it causes a sheen, which is hazardous to the lake,” he said.

A contractor on Friday removed transformers and PCB capacitors from the site. Other waste, including solvents and paint, were packaged and moved to a secure site in Warsaw and will be shipped away at a later time, he said.

City officials received an update on the incident during the board of works and safety meeting Friday, March 1.

“All in all, it was something that was potentially going to be a huge hazard that was caught very quickly by the police department and our guys were able to get in there and sustain the issue,” said Fire Chief Mike Wilson. “The government officials have been very, very effective working with us.”

The status of the suspects who were initially apprehended at the site was unclear Friday.

Thallemer said he believes the city will bear no cost in the clean-up.

Thallemer said the city is working with several groups to secure brownfield funding to eventually remove the structure on the property and deal with the overall environmental condition of the property.

Wilson said the city did spend some money related to the incident and that that will be reimbursed.

City attorney Scott Reust said the property is currently in a “receivership” while creditors try to protect assets of the corporation so they can be paid. Exactly who owns the property was unclear.