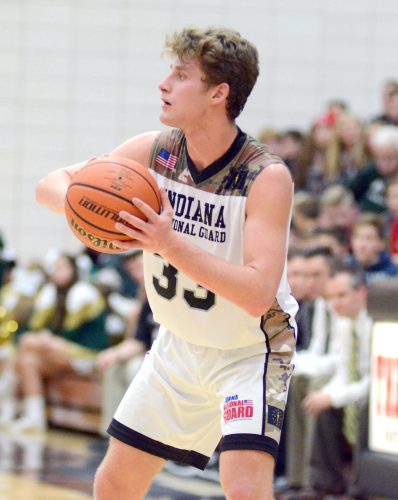 NorthWood’s Nick Bean looks for an open teammate during a home game with Wawasee earlier this season. Bean scored 18 points to lead the Panthers to their third straight win Friday. (File photo by James Costello)

The Panthers trailed by as many as eight points late in the third period but shut Central down over a 14-2 final period on the way to their third straight win.

Ben Vincent knocked down five 3-pointers en route to 17 points, and Nick Bean converted on 4-of-7 shots from beyond the arc on his way to a game-high 18.

Both Bean and Vincent finished with five rebounds and two assists apiece, while Trent Edwards passed out six assists with three steals to go with eight points for Wood (9-12).

Titus Rogers scored 11 for Elkhart Central (5-16) at the game, which saw a total of nine lead changes and six ties.

NorthWood will play Fairfield at the Class 3A Wawasee Sectional next Tuesday at 6 p.m.

A a 14-2 third quarter by the Chargers gave them control, and they held off the Tigers down the stretch. Warsaw actually owned a 31-24 lead at the half before Carroll’s game-changing third-period run.

Daniel McKeeman put up a game-high 20 for the Chargers, while Preston Shearer scored 11, and David Ejah finished with 10 for Carroll (15-7).

The Tigers (13-7) open Sectional 5 play on Tuesday as they take on the Elkhart Memorial Chargers at North Side Gym with a 7 p.m. tipoff.

KNOX 46, TRITON 40
Triton closed off its Hoosier North Athletic Conference schedule a game below .500 at 3-4 with a loss at Knox Friday night.

A 16-5 second period proved to be Triton’s undoing, and Knox pushed its lead out to as much as 13 during the third period on the way to the win.

Pacing the Trojans was Ashton Oviedo with 12 points, four assists and four rebounds, while Beau Hepler finished with 10 for Triton (9-13, 3-4 HNAC).

Triton finishes in fifth place in the final conference standings, while Knox wound up third with a 5-2 HNAC mark. The Trojans will play Elkhart Christian next Wednesday during Sectional 51 play at the Trojan Trench.

Bruce Johnson poured in 20 points, Hunter McIntyre pulled down 14 rebounds, and Cole McKinney scored nine for the Triton JV, which took control with a 15-2 second period.

Knox’s JV got a game-co-high 20 points from Austin Taulbee.