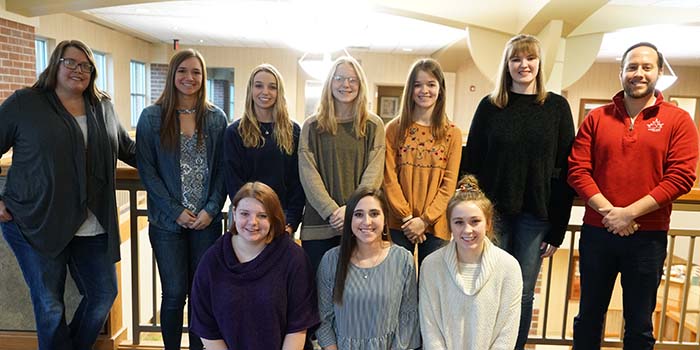 The February meeting, held at the K21 Health Services Pavilion, kicked off with a team building activity which asked students to work together to determine what items would be most important to them if they were shipwrecked at sea. Students paired into groups and discussed together what items they believed would most likely save their lives. After ranking the items from least to most important, students were surprised to see how their lists differed from the US Coast Guard’s ranking. Groups were asked to think about how communication could play an important role in making a quick decision in a real-life crisis at the end of the activity.

Kassi Rowland, member and assistant director of administration of Tom Farms, kicked off the agribusiness presentations with an in-depth look at Tom Farms and its growing business. According to Rowland, Tom Farms is currently situated in several counties including Elkhart, Kosciusko, Huntington, Marshall, Noble and more. The company grows a mixture of products including commercial corn, soybeans and seed corn. Rowland explained Tom Farms’ commitment to “planting that perfect crop” and sharing their story with their community. In 2017, Rowland noted that the business welcomed someone from every continent who wanted to tour the business and its many fields.

Following Rowland’s presentation, students heard from Zachary Tucker, live production audit and research projects manager at Maple Leaf Farms, Inc. Tucker shared with students the history of Maple Leaf Farms and the massive scope the business has both within the US and internationally. Students learned about the company’s commitment to efficiency and its plans for future growth as the demand for duck continues to grow through the world, especially in the restaurant business. Tucker also explained career opportunities that may continue to unfold as the company grows operations both regionally and abroad.

KYLA would like to thank the K21 Health Services Pavilion for their willingness to host the event as well as Rowland and Tucker for taking the time to share information about the county’s Agribusiness.

For more information on KYLA or to learn how to get involved, visit the KYLA website or on Facebook at @kosciuskoyouthleadership.