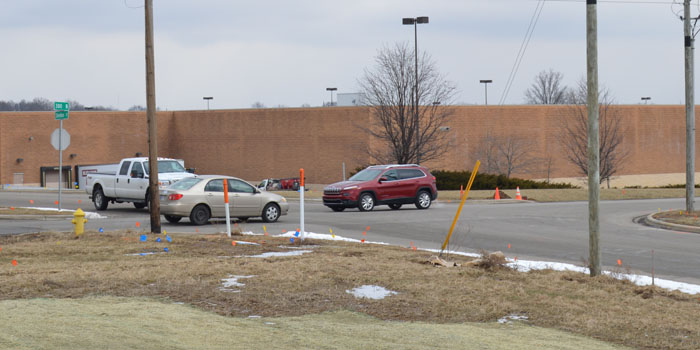 Vehicles pass through the intersection at Sheldon Street and CR 300N, which will be reconstructed as a roundabout this year.

WARSAW – Construction of a roundabout at Sheldon Street and CR 300N is set to begin after a bid for the project was awarded Friday, Feb. 15, during the Warsaw Board of Works and Safety meeting.

The area along CR 300 has seen significant commercial and residential growth in recent years. A shopping center that includes Kohl’s is to the northeast of the intersection and two large apartment complexes are to the west. Madison Elementary is further to the west.

In addition to the roundabout, other roadwork will include sidewalks and a “side path” that is wider and designed to accommodate bicyclists. Improvements along CR 300N will stretch from a bridge to the west and east to SR 15. Some sidewalks will be added to parts of Sheldon.

The project is expected to be completed this year.

The first phase of construction along 300N spanned from Silveus Crossing to the bridge.

The awarding of the bid to Phend & Brown was one of several significant moves by the board on Friday.

In a somewhat rare move, the board rejected both bids for a small sewer project that was intended to serve parts of the northern end of Central Park.

However, Wastewater Utility Manager Brian Davison recommended the board reject both, saying he believes they can do the work in other ways for less money.

Instead of a centralized “conveyance” system that would serve the pavilion and some nearby restrooms, Davison said they will try separate systems. The work is needed to replace a failing gravity system, according to paperwork provided by the city.

The board also approved plans to purchase the shuttered Mobil gas station at the corner of Canal Street and North Detroit Street for $152,500 from JPJ Food Mart. The acquisition will set the stage for the city to seek the creation of a turn lane on North Detroit for southbound traffic to enter the park and for improvements to the entrance into Central Park.