Jean Northenor, former county chairwoman and one of the co-founders of the honor, announced the award recipients. 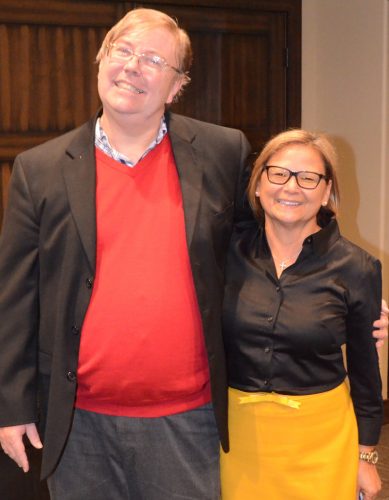 In introducing Kubacki as the woman of the year, Northenor noted she “never has a dull moment. This woman is turned on every minute of every day … she’s done everything that Mike’s wanted done … .” Ragan noted Kubacki has been there for him over and over again.

“I’ve been a Republican my entire life,” stated Kubaki noting her parents were as well and they believed the Republican Party believed even migrant workers had a chance for the American dream. She noted her mother always said it “didn’t matter where you start out in life, it is what you do with life that is important.” Kubacki noted it is her dream, her husband’s dream and her children’s dream “everyone has a chance for a better life and become who they could possibly be… .”

Girod, former county chairman, stated “It’s been an honor and privilege to serve as chairman and I thank you, all of you … this means a lot.”

Mike Ragan, county chairman, noted Girod asked him 2 ½ years ago to follow him in this position. He offered to help me in any way he could and he’s been a wonderful friend … he’s right there for me. If he thinks I need to know something or didn’t do it right, he’s not hesitant to tell me.”

U.S. Rep. Jackie Walorski was the keynote speaker for the evening. Introduced by State Sen. Randy Head, he noted attributes of the congresswoman. “She’s going to go toe to toe with the president when she has to and she has already done it. She will go toe to toe with anybody else who’s going to try to do anything that would impair our economy and our jobs … you always know where you stand with Jackie Walorski.”

Walorski spoke about principles of the district, the need to keep the seats the party holds in the Senate and House of Representatives. She also touched on the economy of the country and about the recent debates with her opponent in the upcoming election.

Her main topic for the evening was on trade and tariffs and her two meetings with President Donald Trump. “We want fairness in trade,” she said. She was asked to meet with the president after he learned “I’m really committed and passionate about the issue of fairness because it could potentially affect Hoosier jobs … I’ve waited like 55 years to talk to the president … I cannot believe I’m talking to the leader of the free world and I told him what the risk was and to make sure these cuts were fair … lectured me about Harley Davidson and China … looks at me perturbed … I didn’t back down … looked back at him … all due respect, I’m asking for fairness. We’ll all win as long as it is fair. Let’s make sure we keep our eyes on accountability and transparency …” She also spoke of her second meeting with President Trump on Air Force One and her two to three minutes of one on one conversation again about tariffs.

Also speaking was Pete Seat, executive director of strategic communications and talent development for the Indiana Republican Committee. He spoke about what the state party has been doing and the U.S. Senate race.

Approximately 100 Republicans attended the annual event, including many of the candidates in the November election.