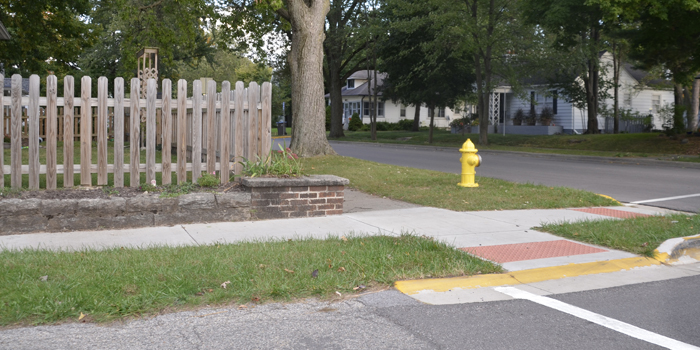 The intersection of Bronson and Main streets in Warsaw.

“I’ll make a motion that we put in no parking from the first alley north of Market Street south on the east side of Hickory Street,” said Commission President Steve Foster. This was unanimously approved.

Talk then centered around a decision made approximately one year ago to make South Union Street a right-turn-only northbound onto Winona Avenue, based on an Indiana Department of Transportation recommendation.

A  2016 study revealed that the intersection had a high rate of accidents, with 15 accidents occurring since 2014. At the time the decision was made to implement the right-turn-only onto Winona Avenue, it was recommended that the situation be reevaluated after a year in order to see if progress has been made.

Warsaw Police Captain Joel Beam provided traffic statistic information at the Oct. 3 meeting, revealing that in 2015 there were five accidents at that intersection while there has been only one reported accident in that area so far in 2018.

Warsaw resident Kim Hart then addressed commission members to share concerns regarding the area of Main and Bronson streets.

“My concern at Main and Bronson. I have a neighbor who put up a picket fence and I totally understand why they want the fence there,” said Hart. “And from speaking to a couple of people, I believe it does meet regulation for distance from the corner, but their lot is higher than the sidewalk. So that picket fence … when the kids are walking home from school … you can’t see those elementary kids above that picket fence.”

Hart inquired as to whether anything is being done in that area or if this is being looked into.

“The problem is that with all the construction and repairs, when you do traffic counts and traffic studies, you want traffic flowing normally,” said Foster. “So that’s what we’re waiting on is for some of the construction projects and those types of things.”

City Planner Jeremy Skinner stated that if nothing is done within the next couple of weeks, it will most likely be sometime next year before this is addressed.

“They won’t do it during the winter because of plowing potentials,” Skinner stated. “If it’s not done probably within the next couple of weeks it won’t be done until next year because they won’t lay those out during the winter. Usually about Octoberish is about the time they stop doing those kinds of things.”

Skinner pointed out that the intent of a stop bar is to indicate where the initial stop is.

“Then if you can’t see, due to obstruction, you move forward until you can. That’s the purpose of the stop bar. It’s your initial stop point, then you go forward until you have a clear view and then you take off,” Skinner advised.

“I’ve never seen so many cars run stop signs and go left on Fort Wayne Street,” said Hart. “It’s crazy what I watch. Bronson really is very heavily traveled. It seems to be a cut through.”

The next regular meeting will be at 1 p.m. Wednesday, Nov. 7.