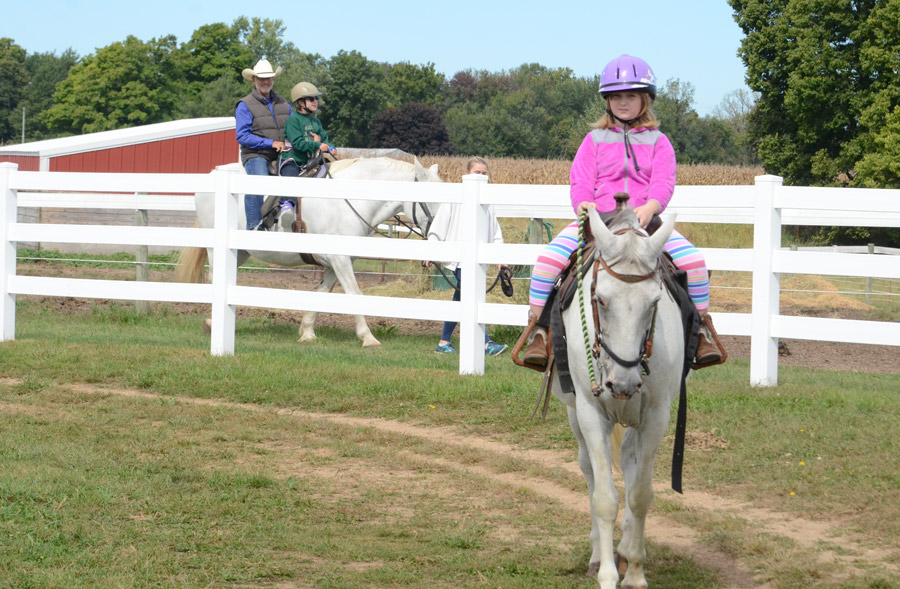 Theresa Fuller, 8, has gained self confidence, core strength and movement through her experience at Magical Meadows and is able to ride on her own. In the back, Cowboy Carl rides with Skylar Payton, on Prince Joe, accompanied by volunteer Christina Brent.

WARSAW — Magic is experienced by those who utilize Magical Meadows, a therapeutic horseback riding stable.

“We started coming out with her in preschool … kept riding after preschool was done. In August when school started, she started walking. She didn’t walk when we first came out. Working here gave her the energy she needed and strength in her legs to walk on her own. Cowboy Carl (Adams), one of her favorites is who she walked to for the first time,” said Amy Seewald, whose daughter Anna, 6, lights up with delight as she quickly walks to get her horse feed, or a brush to brush it down after a ride. “It is one of her favorite places in the world. She knows how to get here from home (Etna Green area).”

The Seewalds are not the only parents who have seen a change in their child. 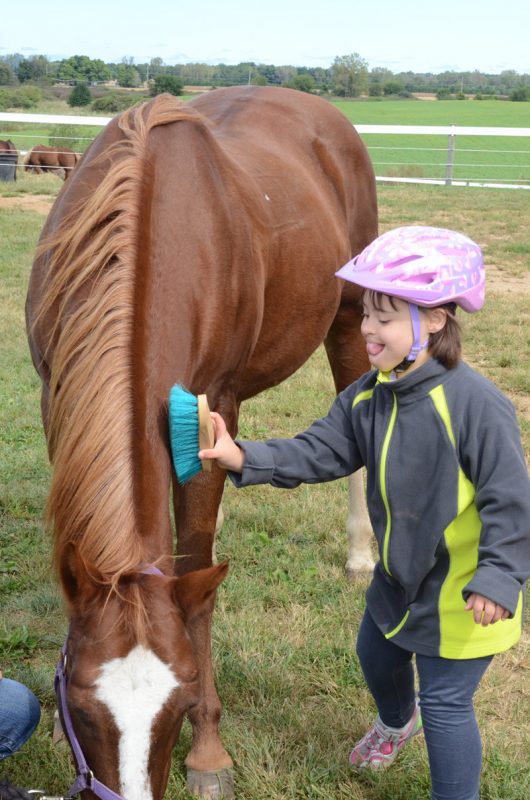 Anna Seewald, 6, knows when she is done riding she has to feed and brush her horse, Peanut. Seewald took her first steps almost 4 years ago after participating in programs at Magical Meadows.

“Self confidence, good core strength and movement,” is what Tim Fuller, Nappanee, has seen in his daughter Theresa, 8.

“She loves it. She is very excited every time we’re heading this way,” Cindy Bockelman said about her 11-year-old daughter Kendal. “I think she likes the independence … it makes her feel good to do it by herself and not have someone there to tell her what to do all the time.” Bockelman has seen Kendal remain focused on something for a significant amount of time while she’s at Magical Meadows. “She stays focused on this almost the whole hour. That does not happen very often. It’s a big deal … focused on everything, she listens and did whatever Miss Tammy said.”

There are hundreds more stories of the changes seen in those who have participated in programs at Magical Meadows.

Currently Magical Meadows assists 120 riders between the ages of 18 months to 80 years of age, with physical, emotional, cognitive, behavioral and other disabilities. This includes students in special needs classes at area high schools and several facilities for troubled youth.

This month starts the 12th year for Magical Meadows. It has grown from seven acres to 41 acres with 16 horses. The addition of additional acreage last year has saved the non-profit organization $30,000 on hay for the horses by raising its own hay and expanding opportunities for the riders.

“A lot of our riders are independent riders. So that allows us to build more trails and do other things,” said Tammy Stackhouse, founder. She hopes to have those participating in the veterans program, Warriors Mount Up, to cut some trails in the back part of the property. “It will give them a purpose and project.”

The program per participant is one hour a week for six weeks and there is a fee, used to offset expenses. “This is an enhancement to the therapy they do received. But it may be the only type of therapy they have … if somebody can’t pay, at the end of the day, they still get on a horse,” Stackhouse said. Magical Meadows hosts fundraisers, rely on individuals, service organizations or church donors and the Good Samaritan Foundation to help. But no one is turned away.

Being a non-profit organization, financial support is always needed, but just as important is the need for helping hands. “Volunteers are a key to everything,” said Adams. “We definitely need people willing to take us on …” he added. “Just having people there to support the parents and encourage the kids is important.”

A highlight of each year is a horse show. This year’s event will be 3 p.m. Sunday, Oct. 14. Participants in programs at Magical Meadows will show off what they have learned and can do. “It’s a bid deal for the kids .. day to shine,” said Stackhouse. Past shows have had more than 300 attending and cheering on the participants. 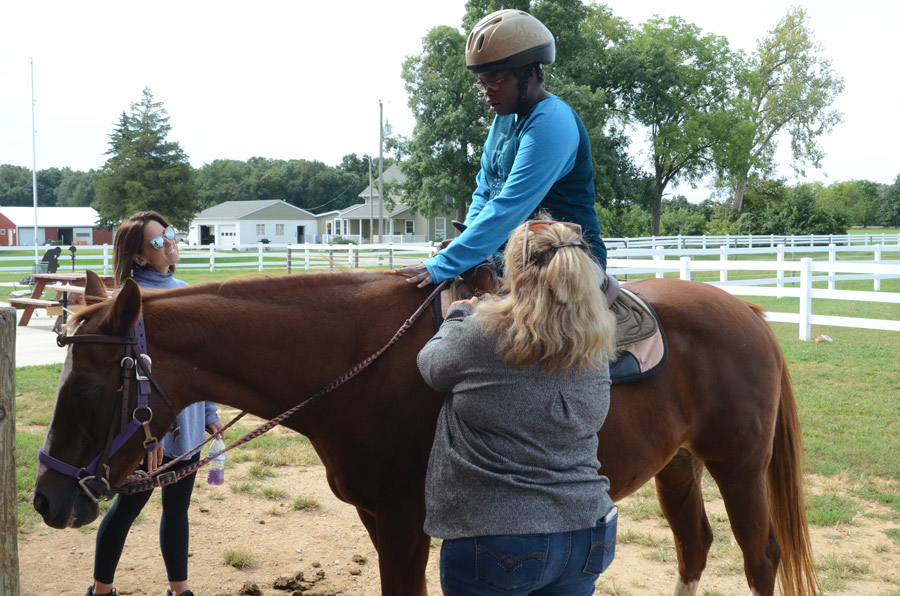 Kendal Bockelman pets Peanut as Tammy Stackhouse, founder, makes some adjustments to the saddle. Cindy Bockelman is shown on the right. 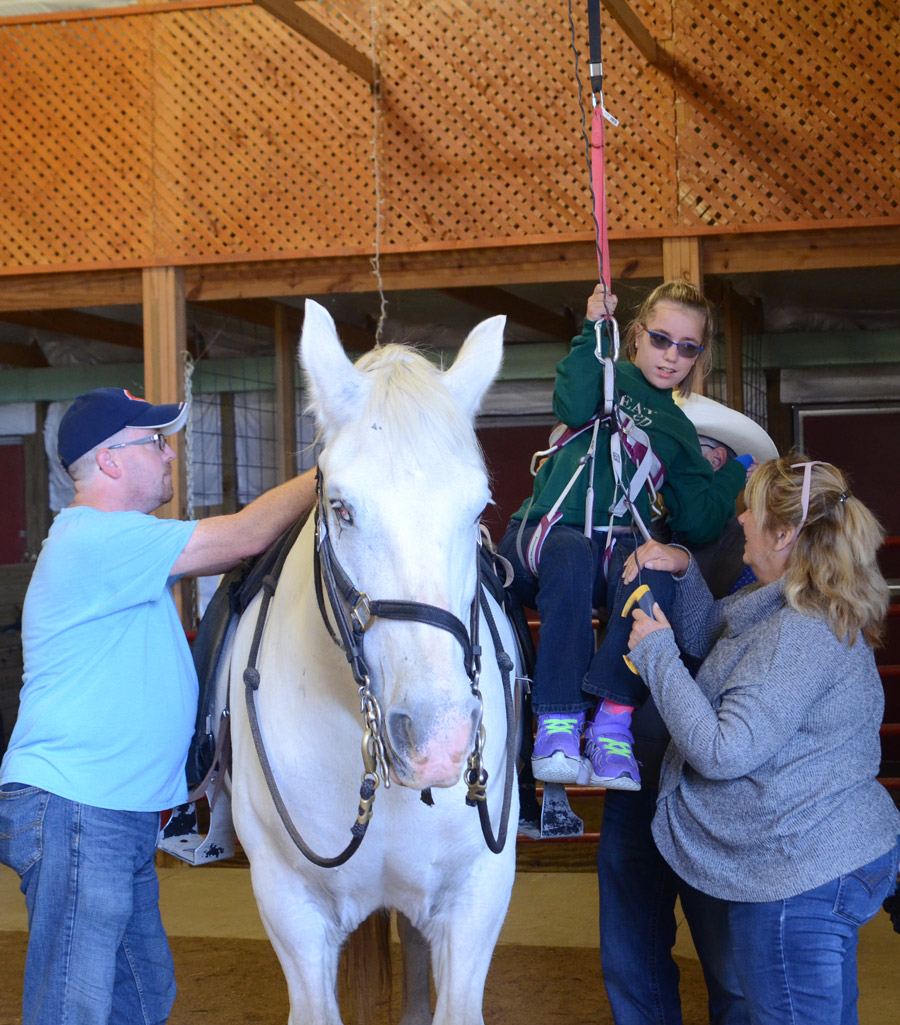 Special equipment, such as this lift, to allow any person the opportunity to get onto a horse. Shown Tony Payton, on the left, is ready to help get his daughter, Skylar, on Prince Joe, while Carl Adams and Tammy Stackhouse assist on the right. 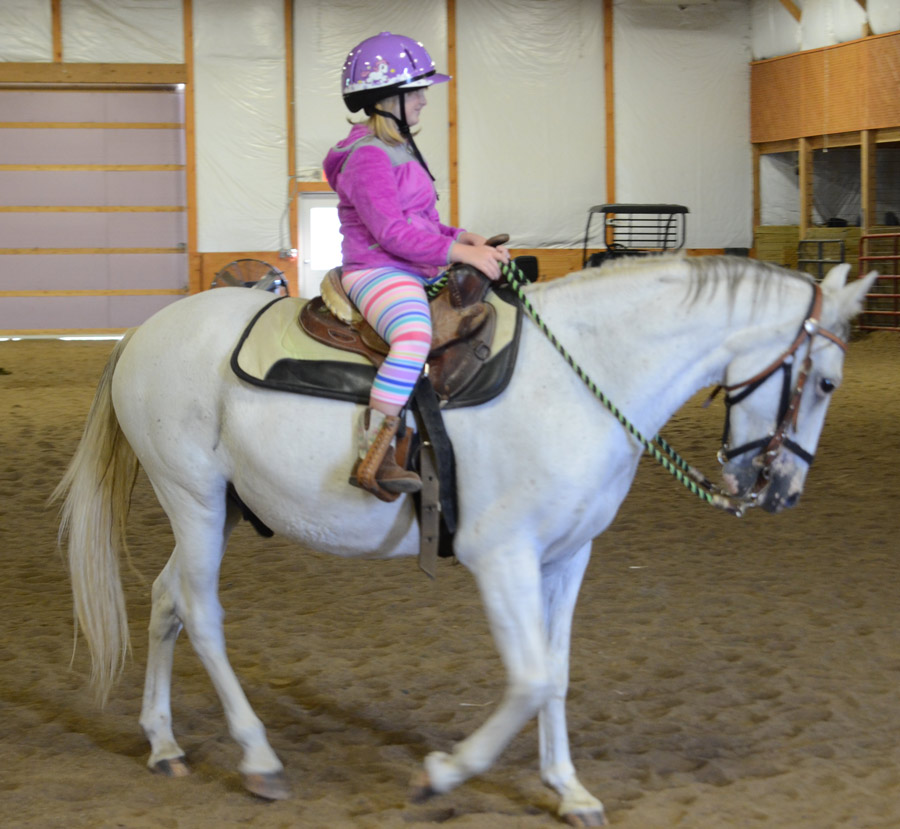 Theresa Fuller walks her horse around the indoor ring before taking him outside for a walk. 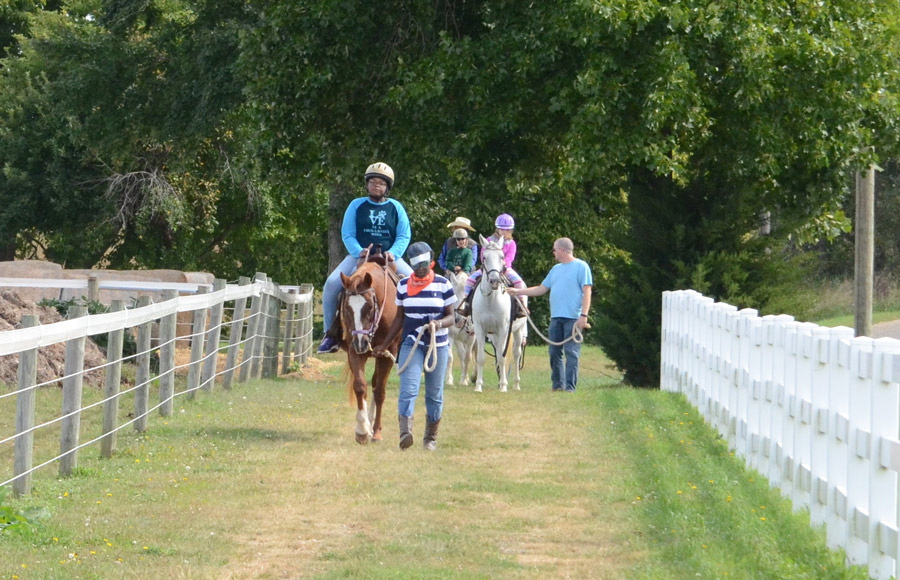 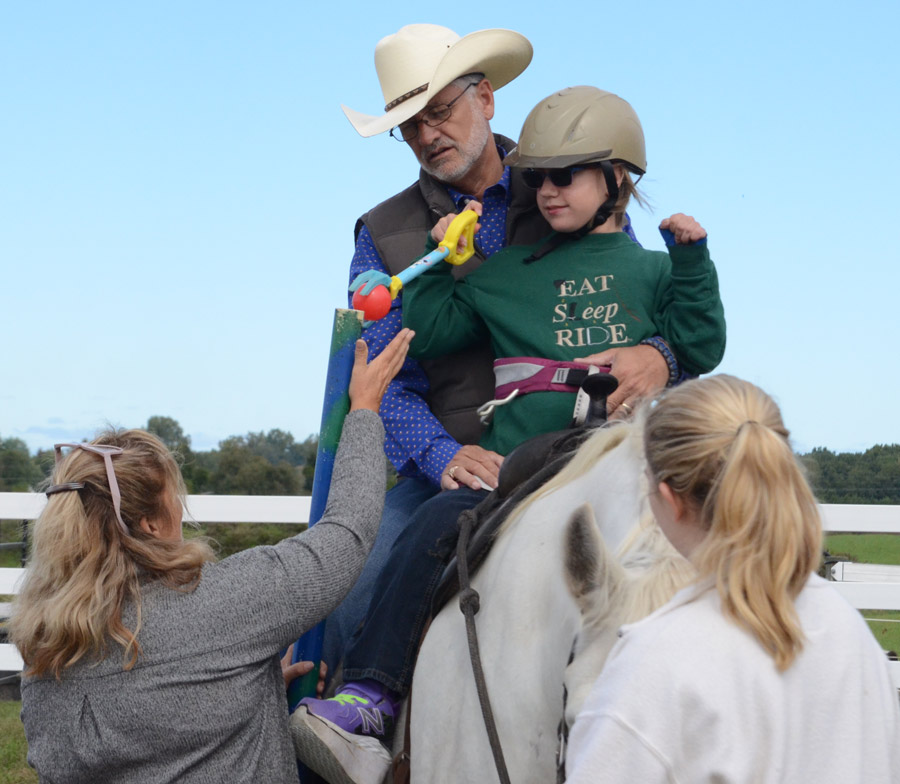 Skylar Payton is shown working on a task with Tammy Stackhouse, founder. Cowboy Carl Adams is shown seated behind Payton.